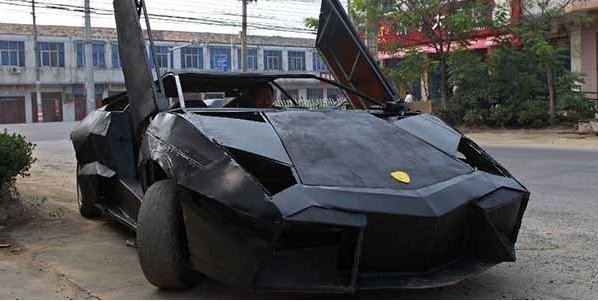 A lot of people around the globe believe that if they can’t afford it, they should make it.

These are supercars fabricated by some folks who thought they can recreate some already existing supercars.

This is a replica of Lamborghini Reventon. It was built in Wang Jian of China’s Jiangsu province. This replica was built using parts from a second-hand Nissan and Volkswagen Santana.

From the picture below, the work is not yet complete. The cost of the real car is over $1 million.

There is this man whose name is Ken Imhoff. It was gathered that he spent 17 years building a replica Lamborghini Countach in his basement.

When he began initially, he thought the project would take him just 5 years but it didn’t go as he thought. It did not go as he planned. It took him one year to figure out how to get it out of the basement.

Certainly, this can give the same feel as the real Countach, but he tried.

Let’s momentarily forget about the Porsche Davido bought for Chioma and focus on this Porsche 911 crafted by someone. The whip was actually made out of cardboard and duct tape.

You may also like: Byton’s All-electric M-Byte SUV Is The First Production Car To Have A Touchscreen On Steering Wheel

Even though this is a fake supercar, it still wears an impressive look.

This custom electric car built by Chen Yanxi, a glass factory worker from China’s Hainan province, may look pricy, but it only took 30 000 yuans ($5000USD) to build. This is why the car can only has a top speed of 40km/h.

As you can see from the picture, the car lacks mirrors, indicators and other safety equipment. This prevents the ride from being street legal.

Nick Truman is an IT specialist from Iver, Buckinghamshire, UK.

He transformed a Ford Granada Scorpio he bought for $150 into a Pagani Zonda using a diecast model and online photos for reference.