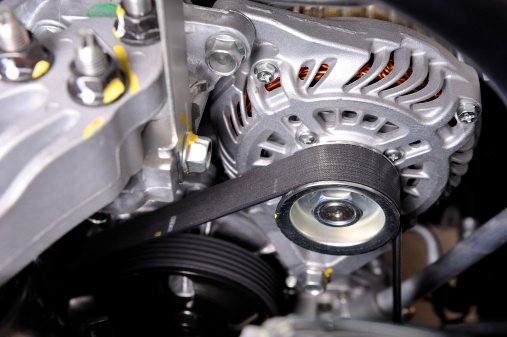 A lot of battery power are needed to keep your vehicle running,so much power that if not for the alternator, the battery’s power reserve would not last.

So, your vehicle’s electrical system and battery depends on well functioning alternator. When the alternator malfunctions or stops working altogether,it can mean expensive repairs, inconvenience or a car break down.

Here is a list of six warning signs to look for in order to help avoid alternator failure:

1. Dimming Headlights
The work of an alternator is to power the starter, ignition and all of the electronic accessories in your car. A dying alternator may cause the power windows and power seats to operate a more slowly than usual.

Also,you will notice your headlights and dashboard lights beginning to dim.

2. Warning light
Most modern cars have a dashboard warning light that alerts you when the alternator is malfunctioning. Usually, the light will be shaped like a battery,or you see ALT (for alternator) or GEN (for generator). This light may only trigger if you are using multiple electrical components.

3. Weak or dead battery
An alternator charges and restore power to your car battery. If the battery is really weak or dead, a faulty alternator cannot bring it back to life.

To troubleshoot whether the issue is the alternator or the battery, just charge the battery and restart the vehicle.

If the battery is weak or dead, the car will continue to run but the lights will again become dim after a short time, indicating a problem with the charging system.

If the vehicle has difficulty starting after the battery is fully charged, the problem is likely from the alternator.

5. Strange sounds
There are many different parts that spin inside your vehicle’s alternator to produce electrical current. If one of these parts becomes worn or breaks, this could cause a grinding noise.

If you suspect your car may be having a problem with the alternator or is displaying any of the symptoms above, have the battery and alternator inspected by your trusted technician.

FRSC to Carry Out “Operation Show Your Driving License’’ in Lagos