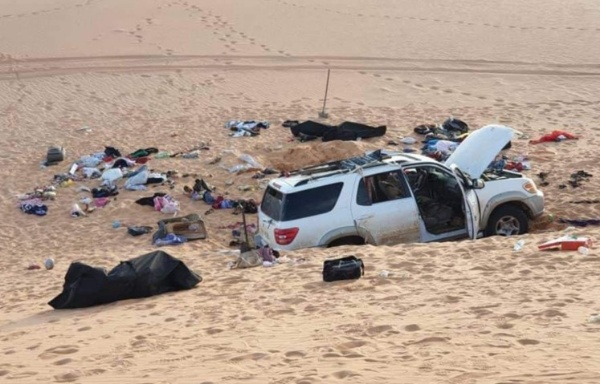 8 members of Sudanese family found dead around their car after losing their way in the Libyan desert.

The discovery comes nearly six months after they departed on a journey across the Libyan desert.

At least 8 members of a Sudanese family probably trying to enter Europe have died of starvation and thirst after reportedly losing their way in Libyan desert.

Shocking images shared online showed the bodies of the family scattered around a white Toyota Sequoia they were travelling in. The body includes that of three women and five men. The discovery comes nearly six months after they departed on a journey across the Libyan desert.

According to local media report, about 21 people were travelling onboard the white SUV. The fate of the remaining 13 people remains unknown.

Libyan police, after thorough investigation, reports that the family departed on a journey from Sudan’s El Fasher to Libya’s Kufra city in August last year. A touching handwritten letter was found inside the car earlier this week.

“To whoever finds this paper, this is my brother’s number. I entrust you with God, and forgive me that I did not bring my mother to you,”

Libyan authorities have launched an investigation to determine how the tragic incident unfolded.