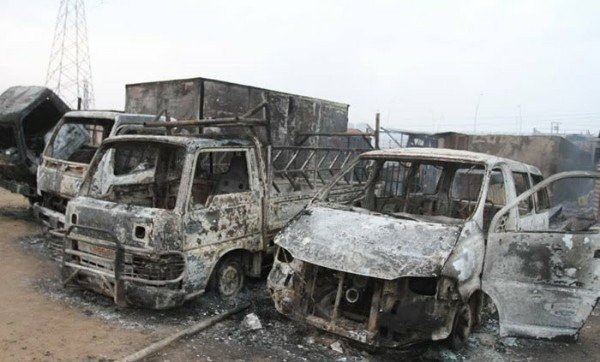 In connection to the Abule-Egba fire incident that reportedly destroyed properties worth millions of naira on Wednesday, December 19, operatives of the Lagos State Police Command have arrested four suspected pipeline vandals.

You can read about the explosion that set properties worth millions of Naira on fire here.

According to Punch, the explosion was as a result of the activities of suspected petroleum products’ thieves, who allegedly vandalised the Nigerian National Petroleum Corporation’s pipeline in the Arowolo area of Abule Egba, Lagos State.

CSP Chike Oti, Lagos State Police Public Relations Officer,  in a statement on Thursday, said the prime suspect, Adedipo Ewenla, had been declared wanted, adding that the four arrested suspects involved in the crime had given account of how the fire incident started.

In the statement, CSP Chike Otis said, “The Lagos State Police Command has recorded a breakthrough in the investigation into the fire incident that occurred on Wednesday, December 19, 2018, around 2 am at the Abule-Egba and Agege areas of Lagos in which at least, 100 houses, 100 shops and 50 cars went up in flames, with the arrest of four suspected pipeline vandals.

“During interrogation, the four suspects gave vivid account of how the fire that emanated from a vandalised petroleum pipe engulfed a fraction of Abule-Egba community and spread to parts of Agege area, destroying properties worth millions of naira. They also mentioned one Adedipo Ewenla as their ring leader.”

Air Peace To Fly London, Dubai And Other Routes In 2019