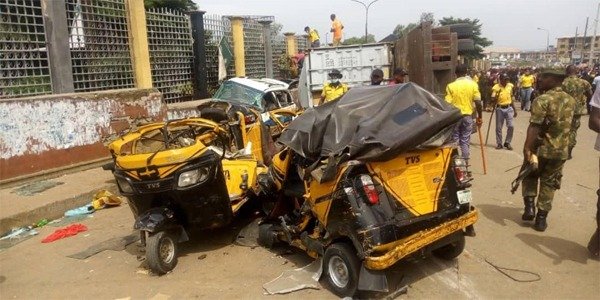 No fewer than six people on Tuesday lost their lives while six others sustained varying degrees of injury. This happened in a fatal motor accident at Upper-Iweka, Onitsha Anambra state.

Vanguard gathered that the trailer ran into some of the vehicles while the container it was carrying fell on others.

Some people were reportedly trapped under the container the trailer was carrying. The Police and men of the Federal Road Safety Corps, FRSC, Onitsha Unit were seen conducting a rescue operation. However, Anambra State Police spokesperson, Haruna Mohammed, confirmed the incident. He said the corpses have been deposited at the mortuary for postmortem examination, while obstruction have been cleared.

According, Haruna, “Today, Tuesday, June 9, 2020, at about 10:am a 20ft Container Truck with Registration No.UMA 259 XB loaded with cartons of Solar keys and bags of Rice driven by a yet-to-be-identified man lost control while in motion along Enugu/Onitsha Expressway by defunct NITEL Onitsha. 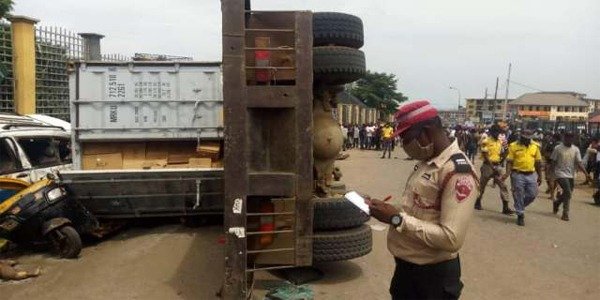 “As a result, the truck fell down on six tricycles and brushed two Sienna buses. “Police operatives attached to Central Police Station, CPS, Onitsha quickly mobilised to the scene and rushed twelve victims to Toronto hospital where the doctor confirmed six persons dead on arrival, while six others are responding to treatment.

“Case under Investigation to ascertain circumstances surrounding the incident.

“The Command urges the public whose relations were not seen to check at Toronto hospital Onitsha for possible identification of the victims.” Sector Public Education Officer, Federal Road Safety Corps, FRSC, Pascal Anigbo who also confirmed the incident, attributed it to brake failure. 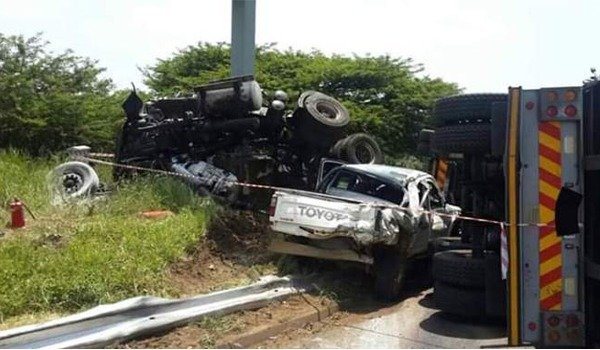 Ford Focus Vs Peugeot 206 Vs Honda Civic, See How Long The Engine Inside Them Will Last Without Oil (Video)