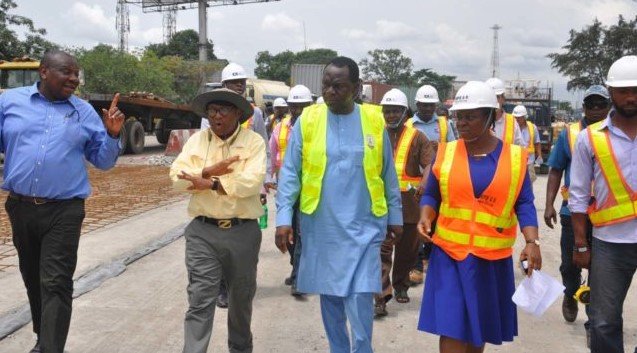 Work on the Apapa-Wharf Concrete Road has been completed, according to a senior engineer with the AG Dangote Construction Company Ltd, contractors handling the project.

With the completion of the road, gridlock on the Apapa Road is expected to ease.

A News Agency of Nigeria (NAN) correspondent who visited the site on Tuesday, reports that the four-kilometre dual carriageway, built with cement, has a median, walkways and side barriers on the various sections painted in black and white.

Big drainage on both sides has also been completed while street lights have also been erected on Sections one and four of the project. Interlocking stones are still being laid on about three-quarter of the service lane of out-bound Apapa dual carriageway. Section one of the project is 520 metres, section two is 450 metres, three is 380 while section four is 650 metres.

The engineer, who did not want his name mentioned, said the concrete road needed to undergo “curing” for a period of time before the road could be opened to traffic, adding that the various sections had different curing periods. Curing process is the number of days required for concrete to gain enough strength for durability.

“We have completed concrete works on all the four sections. We have also finished work on this Eleganza Roundabout and we are linking the rigid pavement to connecting roads.

“We are only waiting for some sections to `cure’. Curing takes 28 days, some sections have cured but this Eleganza roundabout and some other small portions are still undergoing curing.

“ Concrete on the road is 100 per cent completed and we have started erecting the street lights.

“Section four is the longest of about 650 metres and it has cured completely, all other portions have cured except this roundabout area.

The 17 Classes Of Mercedes Benz Cars Explained In Details

“We are screeding and painting the median barriers and sidewalks at the same time. Screeding is like applying POP or dressing on a surface to make it smooth for painting.

“This project would have been completed but we did not expect the amount of rainfall that came in this month of September. “Although the rain is not an excuse, but it is disturbing us.”

The Minister of Power, Works and Housing, Mr Babatunde Fashola, had on June 17, 2017 signed a N4.34 billion Memorandum of Understanding (MoU) with AG Dangote Construction Company Ltd and some other stakeholders for reconstructing the Apapa-Wharf Road. The project is being funded by AG Dangote Construction Company Ltd, the Nigerian Ports Authority (NPA) and Flour Mills of Nigeria Plc.

All 18 Occupants Dead After An Auto Crash In Ekiti