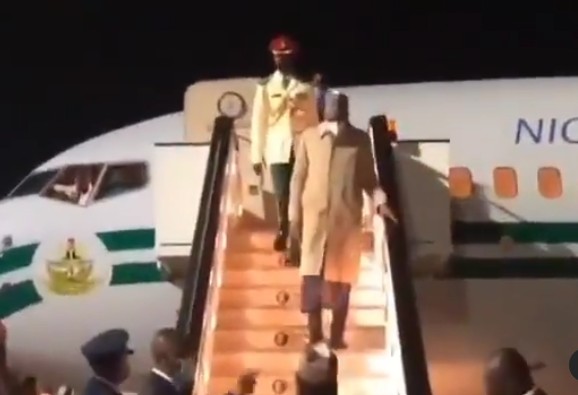 There, he is to undergo a routine medical check-up.

Presidential spokeperson, Bashir Ahmad shared a video of the president disembarking the Presidential Jet on Tuesday night, March 31, as he arrived London.

Upon alighting from the aircraft, the President is transported from the airport in a 2004 Mercedes Benz.

Since assuming office, President Muhammadu Buhari has embarked on several trips to the UK to seek medical care. He, however, has not been to the UK since the outbreak of the COVID-19 pandemic.

Before his departure, President Buhari met with the service chiefs and ordered them to identify leaders of bandits and kidnappers and take them out to restore confidence and normalcy in the affected areas.

The president is expected back in the country in the second week of April.

We Begged Niger Republic To Construct Railway For Them – Amaechi