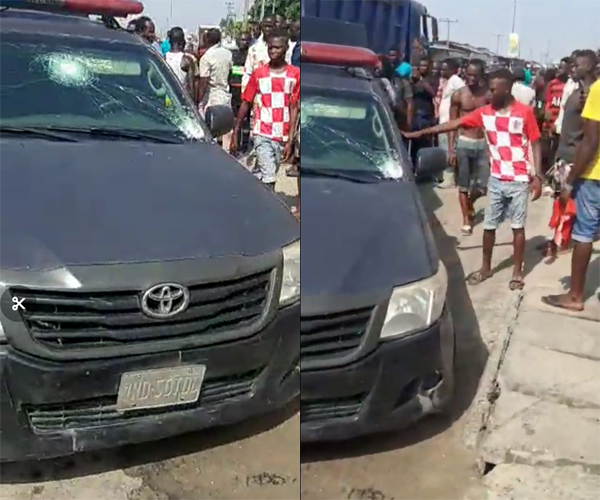 Gunmen opened fire on a bullion van in Ajah area of Lagos on Thursday. The incident occurred at Addo road, close to popular supermarket, Blenco.

The attacked armoured Toyota Hilux was ridden with bullets. The assailants also shot at the tyres to stop the vehicle, and also the lock of the cash storage.

An unidentified okada man was hit by a stray bullet. His lifeless body laid inches away from his motorcycle.

It is unclear if the policemen conveying the money were killed or severely injured.

Eyewitnesses said the incident occurred around 3.00pm on Thursday.

The gunmen were said to be five in number.

Watch the video of the scene of th attack below.

It was gathered that the gunmen who rode in milk Sienna vehicle, opened fire on the bullion van around 3pm.

Video footages of the incident showed the van riddled with bullets with its tyres completely deflated.

The corpse of a man identified as a motorcyclist whose bike laid nearby was seen while the other person’s blood was alleged to have stained the ground.

Witnesses, who recorded videos as the robbery was ongoing, said the gunmen shot the carriage open and carted away the cash inside.

It was gathered the armed robbers started firing the van from a distance but the driver refused to stop until he got to Blenco Supermarket with his tires ruined.

While some claimed the gunmen fled through the lagoon after taking the cash, other said alleged they entered a nearby structure.

At the time of this report, it was not certain the bank whose money was being transported and the destination.

Although Addo Road and Badore areas of Ajah have been notorious for cult- related violence in the last two years, residents said there has been a spike in armed violence since the attacks on the police stations.