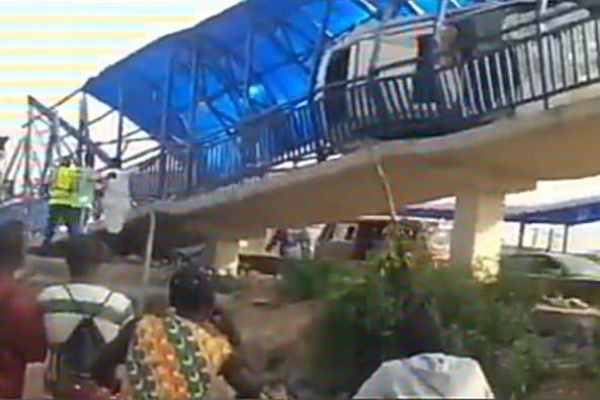 Speeding car climbs pedestrian bridge at the Shogunle end of the Lagos-Abeokuta Expressway killing one and injuring several others.

The car almost drove the length of one side of the footbridge, before falling on its sides.

One person has been confirmed dead after a speeding car climbed a pedestrian bridge at the Shogunle end of the Lagos-Abeokuta Expressway.

According to reports, the incident, which happened around 12 a.m on Sunday, also left several people using the foot bridge injured.

Pictures and video shared online shows that the car climbed the stairs, almost driving the length of one side of the footbridge, before falling on its sides.

A source reports that it wasn’t up to two minutes that he left the spot that the driver – reportedly a learner – crashed into pedestrian bridge.

“The person who drove the car is a learner. The owner of the car gave it to his friend that was a learner. They were high and going for a party, and while driving carelessly, the driver left the road and bumped into the pedestrian bridge and it went up like that.

“It was not up to two minutes that I left the spot that this incident happened and the sound I heard was not a normal sound and when I got back, I saw what happened, with head scattered on the floor.”

Rumor: Nissan Could Sell Mitsubishi After A 4 Year Relationship

Toyota Crown Could Be Turned Into An SUV For Next Generation