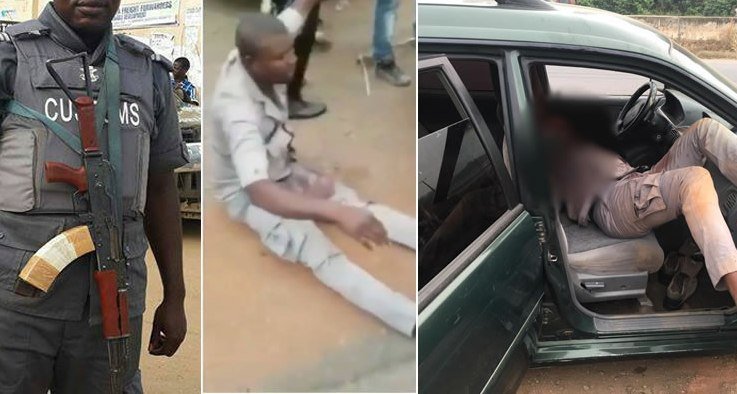 There have been a video circulating online where a customs officer shot an unarmed man over an alleged N5000 bribe.

In the video, it could be seen and heard where the customs officer cocked his gun and shot the unarmed man who is said to be a passenger.

From what we understood from the video, the victim who was shot dead was seen arguing with the Customs officer along other passengers

Also, as the argument continued, a voice, believed to be that of another officer, is heard saying, “Shoot him.” The victim, from the video, had dared the Custom officer to shoot, saying he was a Nigerian.

Before someone could say jack, the Customs officer is heard cock his gun and shoot the unarmed man.

After the passenger was shot dead, other passengers could be seen trying to prevent the custom officer that shot him from escaping.

Update: Nigeria Customs React To The Viral Video Where An Officer Shot A Civilian Dead

My Father’s Dream:Blind Mechanic Drives Car For The First Time In His Life,Reaches Over 124mph In A Mercedes-AMG GT R