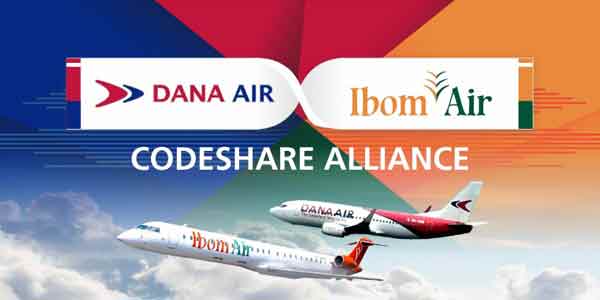 The codeshare alliance, the first of its kind in the sector described by key players as a significant milestone that commenced on June 7, 2021, will afford both airlines a business arrangement to expand their market presence and competitive footprint in the interest of the flying public.

The Dana Air/Ibom Air codeshare agreement may have however put to rest an earlier plan for a similar arrangement with the Cross Rivers State owned  Cally Air.

Speaking on the development, the Accountable Manager /Chief Operating Officer of Dana Air, Obi Mbanuzuo described the domestic airlines full codeshare agreement as the first of its kind in the country.

For the Dana Air COO: ”This discussion started about a year ago and we are happy to be here today, formalizing it. This is the first of its kind for domestic airlines in Nigeria and a huge step in the right direction for both Dana Air and Ibom Air.

”Dana Air, like Ibom Air, is committed to the growth of the aviation industry and both airlines have shown great commitment to customer satisfaction, schedule reliability, operational efficiency, passion, and innovation. 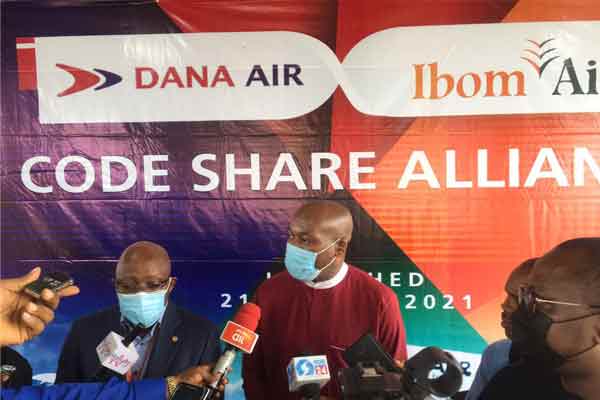 “We do hope that this partnership between Ibom Air and Dana Air will set a positive precedent for the greater good of the industry”, he said.

Also commenting, the Chief Operating Officer of Ibom Air, George Uriesi explained  how the partnership would afford a business arrangement whereby both Ibom Air and Dana Air would jointly offer flights to common destinations, while operating services to destinations that are not within each airline’s regular routes.

“The alliance will offer increased frequencies into common destinations as well as codeshare flights into destinations each airline does not operate into, providing more options for passengers and business retention for both airlines. With the initiation of this business alliance, both airlines have embraced a key global best practice.

“At Ibom Air, our business model and unwavering commitment remain schedule reliability, on-time departures and excellent service. Hence, we are constantly on the lookout for better and more effective ways to serve our customers.

“Having commenced operations in June 2019 using CRJ900 aircraft, additional two brand new Airbus A220 aircraft will be joining the fleet this month, bringing the number of aircraft in the fleet to seven and making it one of Nigeria’s fastest-growing airlines. Ibom Air has delivered a consistent average of 95 per cent schedule reliability and on-time performance since its inception”.

Maritime Sectors, Including Fishing And Transportation, Boosted US GDP By $400bn