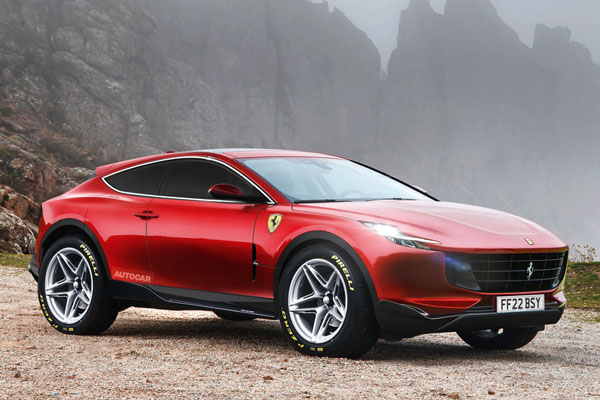 Ferrari has let it be known for a while that it will throw its hat into the luxury SUV ring at some point.  We now know what name the company is giving to its very first utility model: Purosangue. Ferrari’s First SUV

Ferrari is working on launching the SUV in early 2022. However, the carmaker could already be working on two more SUVs—and this time with battery-electric powertrains. The Italian automaker is famous for its V-8 and V-12 supercars.

According to report, the front mid-engine platform Ferrari is developing for future grand touring models. It includes its first SUV, the Purosangue. It has been designed to fit battery-electric powertrains. Also, it will spawn two electric SUVs code-named the F244 and F245 in 2024 and 2026, respectively.

A rendering of Ferrari’s first SUV

The electric SUVs will reportedly have four-motor powertrains and pack 610 horsepower. It will also have 80 kilowatt-hours of battery capacity in base guise. It was also reported that five seats could be possible in the electric Ferraris. This will be due to a central driveshaft tunnel no longer being needed. This is in contrast to the upcoming Purosangue which is expected to be a four-seater, just like the GTC4 Lusso it’s due to replace.  Ferrari’s First SUV

Former Ferrari CEO Louis Camilleri in 2019 said the automaker was studying the potential for an electric grand tourer, but also said such a model wouldn’t be ready until after 2025 due to a lack of suitable battery technology. Since then, patent drawings filed by Ferrari for a modular electric drive system have been discovered.

Interestingly, it was also reported that the Purosangue will be launched with a V-12 spitting out 800 horsepower, with a plug-in hybrid powertrain using a V-8 engine to follow at a later date. Introducing the SUV with a V-12 should help build some credibility for a vehicle that one doesn’t normally associate with a brand like Ferrari. It should also ensure the Purosangue is among the fastest SUVs in production when it finally arrives. Stay tuned.