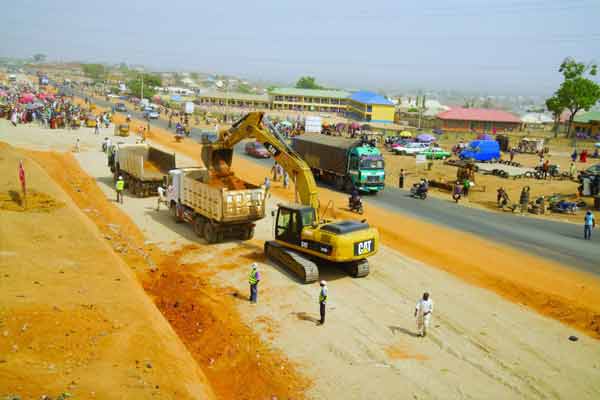 The federal government has commenced the construction work on the 90.65 kilometre Kano-Gwarzo-Dayi federal highway linking Kano and Katsina States.

The contract for the reconstruction of the road to dual carriage way was approved by the Federal Executive Council (FEC) in November 2020, at the cost of N62.711 billion with a completion period of 24 months.

At the event to mark the commencement of the project, Permanent Secretary, Federal Ministry of Works and Housing, Babangida Hussaini, in his welcome address, stated that the contract was awarded on December 1, 2020, to Messrs CGC Nigeria Limited.

Represented by the Director Highways (North -West) in the Federal Ministry of Works and Housing, Mr. Folorunsho Esan, he explained that the dual carriage way has a total number of three bridges, with additional 7.3 metre width and 1.5 metre shoulder width as well as an outer shoulder width of 2.7metres.

He said already, the Kano State Government had “dualised” 7.2 kilometres of the road from the Bayero University Kano (BUK) axis, terminating at the outskirts of Dayi town in Katsina State.

Hussaini, disclosed that the road would be completed with all the furnishings such as lane markings, kilometre signs and signage, adding that the road is expected to last over 20 years.

In his remarks at the ceremony, Kano State Governor, Abdullahi Ganduje, described the project as important to the people of Kano, Katsina, Zamfara, Sokoto and Kebbi States.

The governor also explained that the reconstructed road would contribute in addressing the security challenges along the area, noting that as requested by the federal government, the state government was ready to pay the compensation for the facilities and utilities that would be affected by the project.
Ganduje told the gathering that with all the projects, commercial and business opportunities had increased in Kano as well as improved security.

In his remarks, the Senator representing Kano North, Barau Jibrin, said the project was a promise that the government made to the people during campaigns.

The Executive Director of CGC Nigeria Limited, the construction company handling the contract, Mr. Fan Xiaojing, thanked the federal government and Kano State for the opportunity given the company to handle the project, stating that it was an indication that their expertise in handling such project was recognised

He stated that with the cooperation of all the stakeholders, the job would be delivered on schedule.