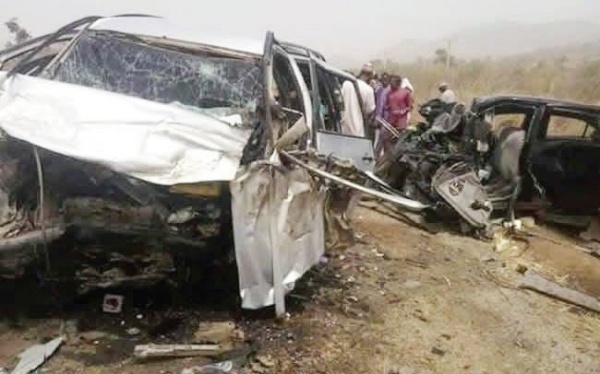 Five people lost their lives and 14 others injured on Wednesday in an ghastly accident along Lagos-Ibadan Expressway.

No fewer than five people lost their lives and 14 others injured on Wednesday in an auto crash along Lagos-Ibadan Expressway.

According to reports, the accident, which occured around Kara turning near Lagos State, involved a truck and a Mazda bus.

The accident happened after the bus driver reportedy lost control of the wheels and rammed into the back of the truck.

The incident was confirmed by the Federal Road Safety Corps and the Traffic Compliance and Enforcement Corps (TRACE). However, the two traffic agencies differed on the figures of the injured victims.

The Sector Commander explained that the speeding bus rear ended the truck while the articulated vehicle was turning at Kara.

He said, “The bus driver was on high speed, lost control and hit the trailer at the rear

The FRSC boss also disclosed that the injured were taken to the Olabisi Onabanjo University Teaching Hospital, and Idera Hospital, both in Sagamu, adding that the corpses of the victims have taken to Fakoya Mortuary in Sagamu.