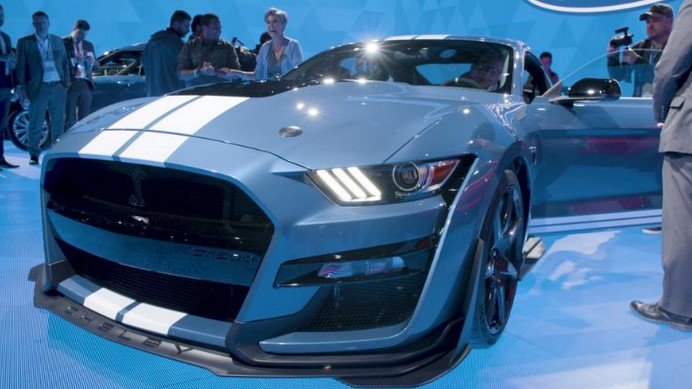 On Monday at the Detroit Auto Show, Ford Motor Company unveiled the most powerful factory-produced Mustang they have ever made. It’s the new Ford Mustang GT500.

Under the hood of the whip is a supercharged V8 engine that is capable of spitting out more than 700 horsepower; that’s huge.

Before the exact horsepower figure for the Mustang can be announced, more testing and validation needs to be done; we’ll have to wait for it.

There are assertions that this Mustang will have higher horsepower than the Ford GT supercar which has 647 horsepower.

The whooping power from the Mustang’s 5.2-liter aluminum engine will go through a seven-speed dual-clutch automatic transmission similar to the type used in the Ford GT.

You may also like: Nigerian Rapper CDQ Just Bought Himself A Ford Mustang As Sallah Gift

The Dual-clutch transmissions provide a more direct transfer of power to the wheels than ordinary automatic transmissions and can shift gears much more quickly. That’s probably why it was chosen.

There’s no manual transmission offered in this car, said Jim Owens, Ford Performance marketing manager, because the automatic can get much more performance from the engine than any human shifting gears could. You just have to let computers do the work for you.

The most recent Ford-produced Shelby GT500 before this one, which went out of production in 2015, produced 662 horsepower from a 5.8-liter V8 engine.