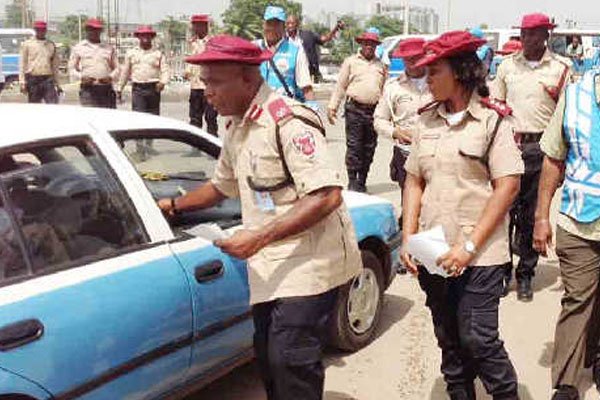 They seized his vehicle particulars and charged him to court on a purported charge of not wearing seat belt. The charge against the plaintiff was withdrawn upon the intervention of Kunle Edun, the then Vice Chairman of NBA, Warri (now the National Publicity Secretary of the Nigerian Bar Association).

Mr. Kunle Edun, acting as the Plaintiff’s counsel and Chairman NBA Warri Human Right Committee subsequently filed an action against the FRSC at the Federal High Court, Warri, seeking multiple issues for resolution by the learned high court Justice in line provisions enshrined in the 1999 constitution, as amended.

You may also like: FRSC Advices Man Who Celebrated Surviving His Sixth Auto Accident (Photos)

The trial Judge upon considering depositions from counsels to the plaintiff, Darlington Ugo Ehirim, and the defendant, FRSC, granted reliefs in judgement to the parties inter alia:

1) A declaration that the stoppage of the Plaintiff’s vehicle Reg. No. KJA 502 and the seizure of his driver’s licence by the Defendant on the 15th day of June, 2017 along the Ajamimogha Road, by Herismor House, Warri (not being a federal trunk road) is unlawful and a violation of Plaintiff’s right to freedom of movement as guaranteed by the provisions of section 41 of the Constitution of the Federal Republic of Nigeria, 1999, as amended.

2) An order of injunction restraining the Defendant by itself and/or through its privies, agents, officials, subordinates or under any other guise from further harassing, arresting, detaining and/or prosecute the Plaintiff or any motorist in respect of anything done in connection with vehicular traffic and/or the use of State’s and Local Government roads.

The trial court agreed with all the issues raised by Kunle Edun, the Plaintiff’s counsel and accordingly granted all the reliefs sought.

Car Technology That Learns A Passengers’ Age, Gender And If The Driver Has Cheated Is Now Available