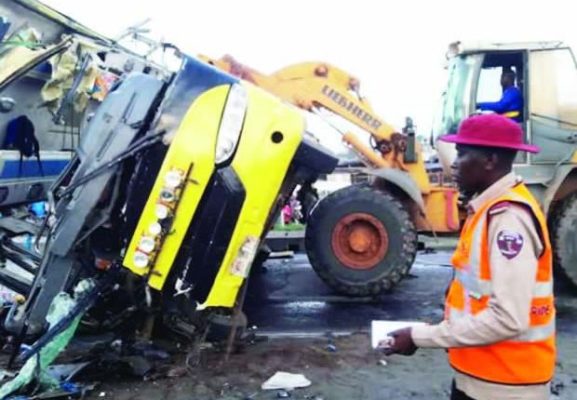 Just few days ago, 10 people lost their lives after a luxurious bus that belongs to Young Shall Grow Motors Company rammed into a stationary truck parked along the road at the Asese end of the Lagos-Ibadan expressway. The crash happened in the early hours of Tuesday, around 5 AM.

The Mercedes Benz Marcopolo was heading to Lagos state from the south-east region of the country when the accident occurred.

The Marcopolo with number plate, SMK 867 XG, reportedly rammed into a stationary Iveco truck with number plate, AAA 193 XP, which was said to have developed a mechanical fault and was then parked by the roadside with no caution to warn other road users.

Nine people died on the spot and one died after being rushed to the hospital for treatment.

FRSC Releases Road Use Manual For The Physically Challenged

Mr. Bisi Kazeem, FRSC’s Public Education Officer, stated this in a statement in Abuja on Wednesday and said that the transport company was expected to report at the Corps’ headquarters.

He revealed that after full investigation into the accident that the transport company may be prosecuted.

Asese Accident Survivor, Prosper, Shares Painful Story Of How His Friends Cried For Help Until They Breathed Their Last (Graphic)