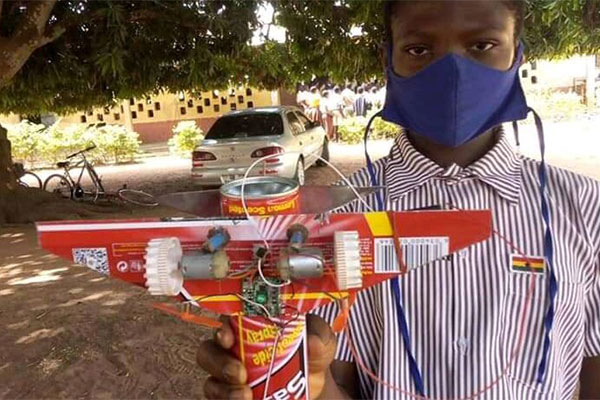 The boy, named Attah Gad, said his dream is to become a pilot and fly planes.

A JHS 1 student from Kintampo in the Bono East Region of Ghana has built a toy aeroplane with capacitors and other electronics.

The initiative is of high sophistication that the toy airplane could fly on its own from one point to the other.

The plane could fly because he used electronic components that provided electrical and lifting power for the toy plane.

The boy, named Attah Gad, said his dream is to become a pilot and to fly air planes.

To make it adorable, Attah used the container of Sasso insecticide spray and other miscellaneous items.

Information gathered suggests that the creative boy comes from the Bono East Region, specifically from the town called Kintampo.

This young boy’s toy aeroplane wowed cheering onlookers while displaying his work in his school uniform. He said his ultimate dream is to become a pilot when he grows up. Attah has become one of the young people in Ghana who have made use of practical knowledge learnt from school.

Japanese Billionaire Is Looking For Eight People, Including Nigerians, To Fly To Moon With Him For Free In 2023