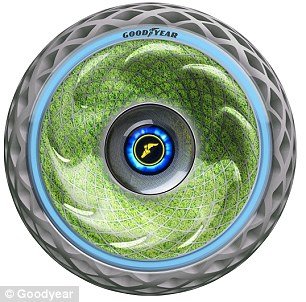 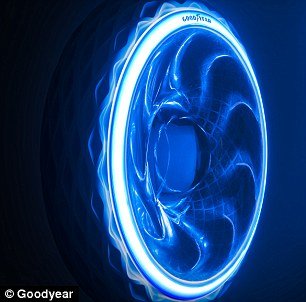 Goodyear has unveiled its eco-friendly concept wheel covering at the 2018 Geneva International Motor Show that will convert carbon dioxide (CO2) into oxygen, using the power of photosynthesis.

Goodyear claims that in a city the size of Paris, with about 2.5 million vehicles, the tyres would remove  more than 4,000 tonnes of carbon dioxide per year. It would also produce almost 3,000 tonnes of oxygen a year.

While moss will make up most of the sidewall of the Oxygene tyre, the rest would be made from 3D printed rubber powder from recycled tyres.

An open-tread will allow the tyre to absorb water from the road surface, which will increase grip in damp conditions, according to the manufacturer.

The moss will combine this water with sunlight and carbon dioxide from the atmosphere to produce energy and oxygen.Oxygene harvests the energy generated during photosynthesis to power its embedded electronics.

Goodyear say the lights in the tyres will be customisable and will warn other road users of braking or other manoeuvres, such as changing lanes.

Oxygene tyres will be able to connect to the Internet of Things, a broad category that refers to devices or sensors that connect, communicate or transmit information over the web.

It will do this through a Li-Fi connection, which operates at the speed of light. Each tyre will use this to communicate with other tyres and different vehicles 100 times faster than the fastest current Wi-Fi

Goodyear said the Oxygene is meant to challenge our thinking and help drive the debate around smart, safe and sustainable future mobility.

Hyundai Recalls 43,941 Cars Because Steering Wheel May Detach While Driving