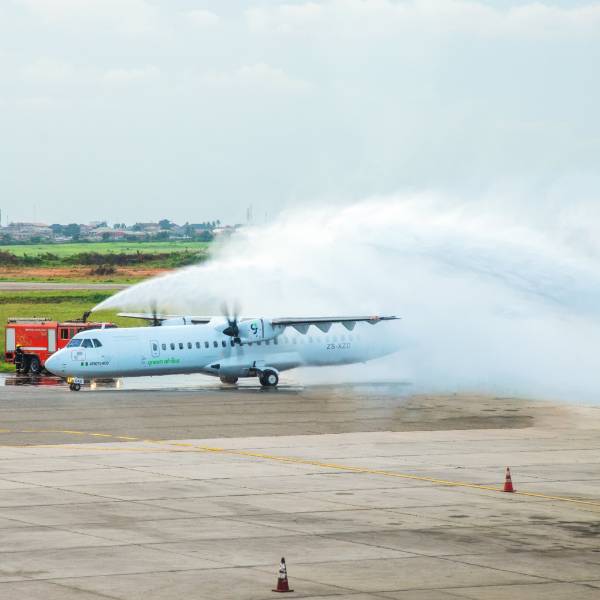 Green Africa Airways, Lagos-based airline, takes delivery of one of its first ATR 72-600.

The aircraft arrived in Lagos on Friday, April 23.

Green Africa Airways Ltd, a start-up airline based in Lagos, has taken delivery of one of its first ATR 72-600. The aircraft arrived in Lagos on Friday, April 23 in an atmosphere of jubilation.

The ATR-72-600 plane is the first of the three aircraft currently leased from ACIA Aero Leasing. This is a regional aircraft lessor with offices in Ireland, Mauritius, France and South Africa.

The new entrant carrier recently unveiled the livery of two aircraft (5N-GAE and 5N-GAA) with the third aircraft (5N-GAD) now gorgeously wrapped in the Green Africa livery. It is in preparation for the final lap of the Air Operators Certificate (AOC) process.

The first aircraft arrived in the country through the Murtala Mohammed International airport. It was received by the highly elated Founder and Chief Executive Officer of the airline, Babawande Afolabi, President and Chief Operating Officer, Neil Mills, the founding and other team members.

“This is a great day for all of us at Green Africa and the beginning of what we all hope is a new era in Nigerian aviation. ACIA Aero Leasing has been a very supportive partner and we are proud of this new relationship.

The arrival of our first aircraft is a precursor to the completion of our AOC process and very soon, customers from across Nigeria will be able to make bookings on our website and take their first flight with Green Africa.”

“Whilst the industry is going through a period of significant disruption, there are a few carriers with a strategic roadmap, such as Green Africa, that are looking to provide effective solutions that the current market opportunity brings.

We at ACIA are pleased to provide Green Africa with the first set of aircraft to launch its commercial operations, starting with Nigeria and eventually, the broader African continent.”

Following the arrival of the aircraft, Green Africa is expected to commence demonstration flights on its route network as part of the AOC process.

Green Africa has received its Air Transport License from the Nigerian Government and is now working closely with the NCAA to complete its AOC certification process.