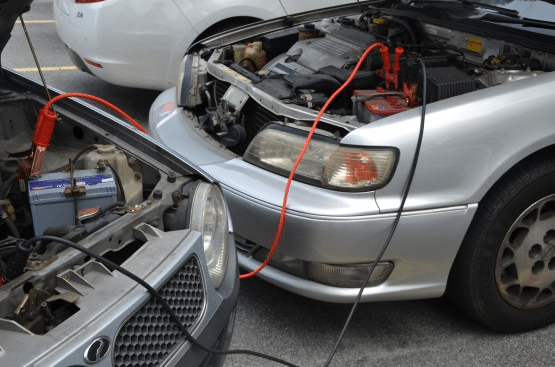 Your battery can die from leaving your keys in the ignition,not closing the doors all the way, and of course leaving a light on for an extended period of time.And luckily even though the battery plays such an important role,it is one of the easiest things to fix.
Before jumping to conclusions,you should make sure it is in fact the battery that’s the problem so you don’t waste your time and energy with jumper cables.
How do you know if your car’s battery is the issue?Here are some tell-tale signs to look out for:
If you put the key in the ignition and you don’t hear anything or see any lights turn on,it most likely is a dead battery.
If your notice your engine turn over,but not start
If your headlights turn on,but dim
If the battery warning sign lights up on your dashboard
If you’ve previously had problems with your battery
Now that you’ve determined you need to jump-start your car,make sure you have all the necessary tools.
This simple trick takes less than five minutes and only requires a set of jumper cables,a glove and another working vehicle.
Follow the steps below to give your battery a boost and get back on the road.

Turn off all electrical components.

Step 2
Both cars should be turned off,with keys removed.

Step 3
Open the bonnets of both cars.

Step 4
Identify the positive and negatives terminals on both car batteries.
They will be labeled with a plus(+)sign for positive and minus(-)sign for negative.

Step 5
Connect one of the red clip on the jumper cables to the positive(+)terminal on the dead battery.

Step 6
Connect the other red clip to the positive(+) terminal on the working car’s battery.

Step 7
Connect the black clip on the jumper cables to the negative(-)terminal on the working car’s battery.

Step 9
Technically,there are two ways to complete the jumpstarting of a car:

Step 12
If you’re confident that your dead battery was just drained by accident,keep your car running to charge it back up,otherwise,go directly to a repair shop without shutting off the engine,or you risk having the battery die on you again.

Remember to thank the person who helped jumpstart your car!

How to Jump-Start Your Car

9 Things To Do When Involved In A Road Accident – LRU

6 Things You Must Do When You Have A Tyre Blowout