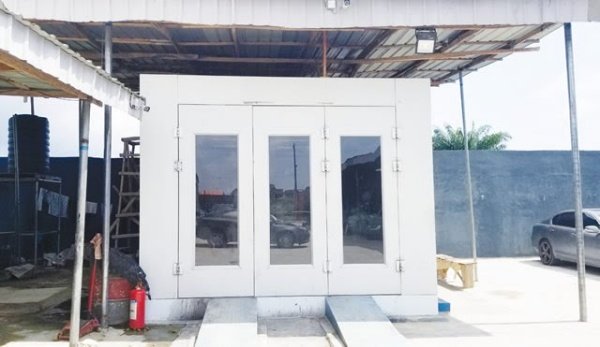 A Lagos-based JD Auto Workshop car painter was found dead while sleeping in a car packed in an oven. He was said to have switched on the ignition and AC before dozing off.

A Lagos car painter, working with JD Auto Workshop, has died while sleeping in a car parked inside an oven.

According to reports, the deseased, named Oguntunbo, and his co-workers were forced to sleepover at the workshop due to the gridlock on the Lekki-Epe Expressway.

Back at the workshop, the victim was reported to have allegedly sneaked out from an office – where he was initially sleeping with his coworkers – into a vehicle parked in the oven.

While sleeping in the car, Oguntunbo was said to have switched on the car ignition and the air conditioner.

The next day, his lifeless body was found in the car parked inside the exhaust-filled oven. Several attempts to revive him up proved abortive.

One of his coworkers named Adesina, narrated what happened before the sad incident.

“We were supposed to go home on Saturday, but because there was gridlock, we decided to sleepover in the workshop with the intention of leaving early the next day when hopefully there would be less congestion on the road. But when I woke up around 4.30 a.m, I woke Peter up, but Oguntunbo was nowhere to be found.

“The gate was bolted from inside and he should, therefore, be on the premises. So, we started searching for him in the workshop and also checked all the vehicles that were parked on our premises, but we could not find him. But when I sent someone to check the oven, he returned to inform me that the engine of the car parked in the oven was still running.

“I quickly went to the oven and saw that the smoke coming out of the exhaust pipe of the car had filled the whole oven and escaped immediately the doors were opened. The oven was very hot and when I got in, I saw Oguntunbo lying on the car seat.

“I started reprimanding him for what he had done but he never responded. I never knew he had died. So, I informed my boss and we both went to the police station to report.”

Oguntunbo’s boss, Daye Oruwari, while commiserating with the bereaved family, said the deceased started working at the workshop three months before the incident. He added that the company supported the family with the burial arrangements.

“After his colleagues tried waking him up and he didn’t respond, I was informed and we went to report at the Ogombo Police Station, where the Divisional Police Officer led a team to inspect the scene of the incident. We also contacted his family and his corpse was later deposited in the mortuary.”

According to the state Police Public Relations Officer, Bala Elkana, no mark of violence was found on the corpse. He added that Oguntunbo’s remains were deposited in the mortuary for an autopsy.

Never Sleep In A Car While The AC Is On

These are some of the reasons why it’s a bad idea to sleep in a car when the ignition and AC are on. One can die of suffocation as a weak AC will not be able to completely refresh the air inside the car.

Again, with the ignition on, the exhaust fumes from a car packed in a less ventilated area can enter the car and suffocate you.

31 GIGM Bus Terminals In Nigeria With Their Locations

Bishop Sam Zuga Gifts King Of Ejule A Lincoln Navigator SUV, Promises To Give Out 1000 Cars In 2020