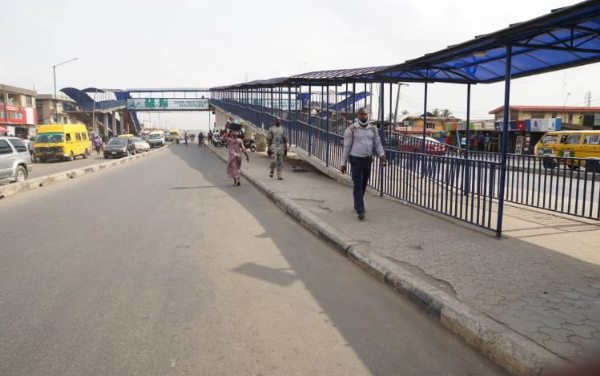 It warned that violators, including men of the Nigerian Armed Forces, indulging in such practices will be prosecuted.

The Lagos State Environmental Sanitation Corps (LAGESC) has noted with dismay the activities of commercial motorcyclists (Okada), dispatch riders and men of the Nigerian Armed Forces, in official uniform and mufti, who have virtually turned the wheelchair ramps on pedestrian bridges to make-shift bridges for crossing to opposite lanes on major highways in the State.

Speaking on the despicable behaviour at the Agency’s Command Headquarters, Bolade-Oshodi, the Corps Marshal of LAGESC, CP Gbemisola Akinpelu (rtd.) said the negative trend has affected the use of bridges by pedestrians and People Living With Disabilities (PLWD) as they now resort to crossing the expressway and endangering their lives.

She emphasised that the Agency is determined to put a stop to the ugly development and ensure that defaulters are prosecuted, saying :

“The unruly habit by commercial motorcyclists, uniformed men on private bikes and dispatch riders using the wheelchair ramps meant for People Living With Disabilities (PLWD) to cross to the other lanes on major expressways in Lagos State is against the Law”.

Akinpelu reiterated that Governor Babajide Sanwo-Olu has, therefore, instructed the Agency to apprehend any violator indulging in such practices and prosecute them in accordance with the Lagos State Environmental Management and Protection Law 2017 as amended.

Messwagen : Meet The 1960 Mercedes-Benz 300 Measuring Car That Is Connected To Test Vehicles

BRT Bus Boarded By The Deceased Lady Was Locally Supplied, Has No Inbuilt Cameras – Sanwo-Olu