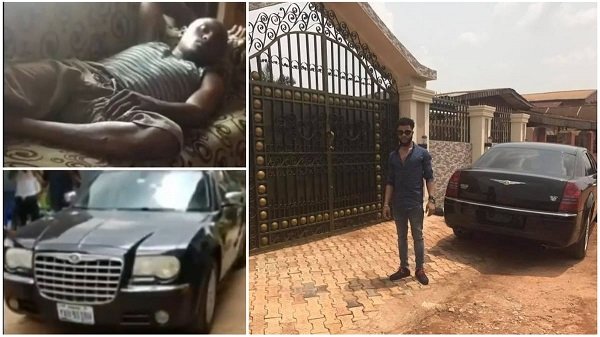 A Nigerian whose name is Fedeco Godwin on Facebook, made a post stating he has forgiven the mechanic that totaled his Chrysler 300 beyond recognition and repair.

According to him, the mechanic had told one of his apprentices to get his car back to him but the apprentice had another agenda.

Instead of the apprentice to get the car to him, he went to show off the car at different locations in Benin city.

I’m overwhelmed with joy seeing him ALIVE… Don’t care about the car!
His master instructed him to take the car back to the owner after car checked and it was confirmed in good condition.
what did he do? he went to a different location his motive is unknown but some said he went showing off with someone else’s car and the result was Fatal Accident that completely destroyed the car beyond recognition and repair.
Thanks to God almighty probably his family would have twisted the story if he has died fortunately today he is alive and ok but my car completely destroyed.
All thanks to God.

Stop posing with what does not belong to you all in the name of fake impression, the end is
cataclysm.