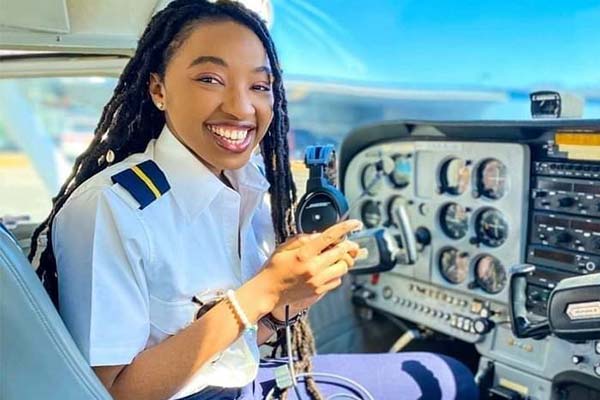 Miracle recently joined the elite group of 7% of females and 1% of black female Pilots in the world.

In recent times, Nigerians abroad have been making the country proud even though its dented image continue to rot in the western world. Virtually all fields have at least one Nigerian breaking records in the name of the country.

Meet Miracle Izuchukwu, a 23-year-old-Nigerian who is a Commercial Pilot (candidate) and Flight Attendant at American Airlines.

Miracle recently joined the elite group of 7% of females and 1% of black female Pilots in the world.

When interviewed she recalled difficulties she encountered while growing up. She noted that the environment didn’t encourage young girls to dream big.

“I who grew up in a society that did not encourage young girls to dream big, career-wise. I remember watching lots of TED Talks to give myself more insights on possible careers that might interest me…to no avail,” said Miracle.

In 2019, she had an encounter with an Airline Pilot while working as a customer service rep. He opened her eyes to the possibility of becoming a Pilot. A few weeks later, she went on a discovery flight that sealed it for her.

“I came home that day, called my father, and told him I was considering becoming a Professional Pilot.

He said, and I quote: “if he gets on a plane and sees a woman as the Pilot, he would get off the plane” words cannot explain the pain and confusion I felt. I needed that validation,” she narrated.

“What if, in raising children, we focus on ability instead of gender?

In a world that wants us to whisper, I choose to shout,” concluded Miracle.