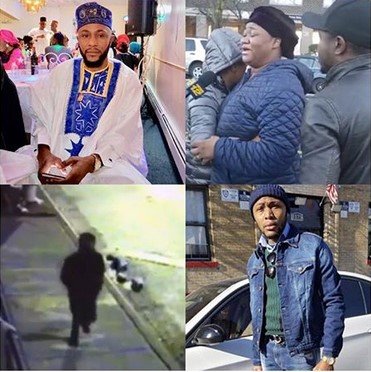 An Uber driver was stabbed to death while sitting in his car Saturday night in the Bronx, New York, according to local news reports.

27-year-old Ganiou Gandonou was attacked inside his black Toyota Camry around 9 p.m., the New York Times reported . After bleeding heavily from his neck, he died at Jacobi Medical Center in the Bronx, according to ABC7.

Police have released a video of a person of interest wanted for questioning and were offering a $2,500 reward.

An Uber spokesperson said the company was working with law enforcement in their investigation.

“This is a horribly tragic incident and our hearts go out to the grieving family, an Uber spokesperson said. We stand ready to work with law enforcement to assist their investigation in any way possible.

A local drivers group was offering a $3,000 reward for information leading to an arrest.

We are horrified by the death of our fellow for-hire vehicle driver and our thoughts go out to his loved ones. We must continue to do more to protect the safety of for-hire drivers, the Independent Drivers Guild, which represents some 70,000 drivers for all ride-hailing companies in NYC, said.

You may also like: Killers Of Uber Driver Arrested; Car Recovered

We call on anyone who may have witnessed the attack to contact the police so that the culprit may be brought to justice. The Independent Drivers Guild is offering a $3000 reward for any witness who can provide information that leads to the arrest of the killer and helps police bring them to justice.

The drivers wife, Latifatou Acimi, told the New York Post that her husbandwas a quiet man who worked hard to provide for her and their 2-year-old son.

My husband was a very quiet man, a very hard-working man, Acimi said . He always said, Im working hard for my son so he doesnt have to.

I want to look that person in his face. I want to know the reason why he [did] it, because I know for sure he doesnt got any reason, she said of the killer. “He took the wrong person.”