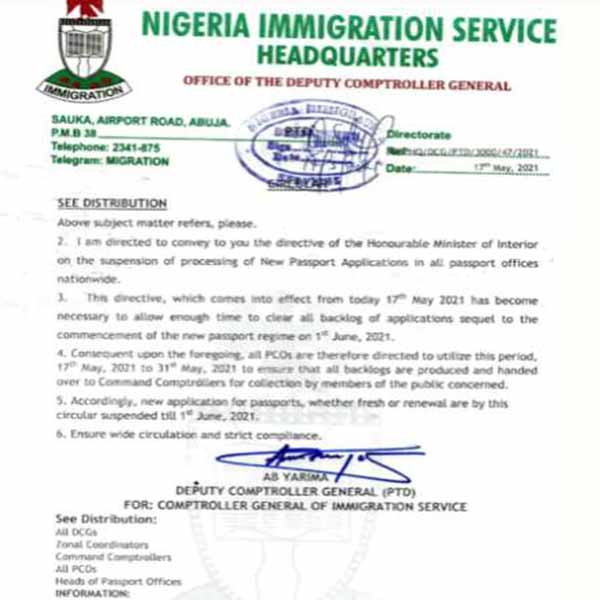 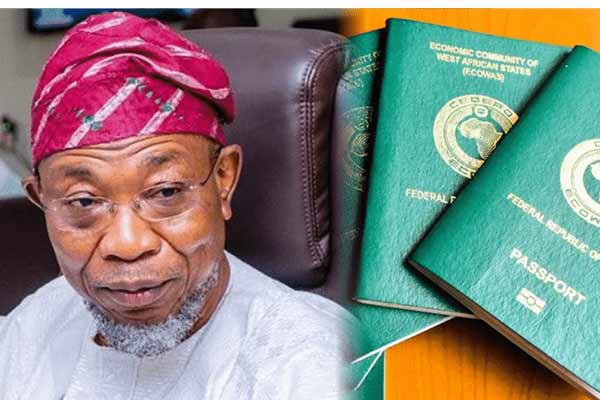 The directive, which took effect on May 17, was disclosed in a statement signed by the Deputy Comptroller General, AB Yarima.

The statement described the suspension as a necessary step to ease the preparation for the commencement of a new passport regime.

“This directive, which comes into effect from today, May 17, 2021, has become necessary to allow enough time to clear all backlog of applications sequel to the commencement of the new passport regime on June 1, 2021,” said the NIS.

It added, “Consequent upon the foregoing, all PCOS are therefore directed to utilise this period, May 17, 2021, to May 31, 2021, to ensure that all backlogs are produced and handed over to command comptrollers for collection by members of the public concerned.”

All offices nationwide were advised to comply with the suspension of all applications until June 1.

Last April, the House of Representatives urged the NIS to, within 72 hours, issue passports to Nigerians who fulfilled all requirements.

This was sequel to the unanimous adoption of a motion by Ugonna Ozurigbo at a plenary. Moving the motion earlier, Mr Ozurigbo said thousands of Nigerians who paid for the passport were yet to be issued the booklet.

“I am aware of the persistent scarcity of the passport booklets at most Nigeria Immigration Service offices and some of the nation’s foreign embassies.

“I am concerned that most Nigerians who have applied for passports and fulfilled all the requirements are constrained to wait endlessly for the booklet, which ordinarily takes less than 48 hours to be issued.

“This situation is causing untold hardship on Nigerians with the urgent need to travel out of the country,” he said.

Amid Israel-Palestine Conflict, Russia Set To Launch Unstoppable 6,100-mph Missile ‘Capable Of Wiping Out US Cities’