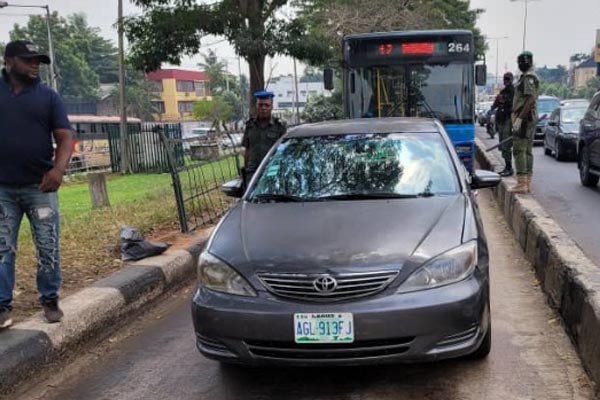 According to the motorist, there was no indication on the road that it was uni-directional (one way).

A motorist, Adeolu Oyinlola, has demanded the sum of N10m as compensation from the Lagos State Government over the seizure of his vehicle by the Lagos State Environmental and Special Offences (Enforcement) Unit, aka task force.

PUNCH Metro had reported that Oyinlola’s driver, Sunday Emem, while driving him on the Apapa-Oshodi Expressway on August 14, 2021, was accosted by one of four policemen around the BOC Gases area, Oshodi, for allegedly passing a uni-directional road (one way).

According to Oyinlola, there was no indication on the road that it was uni-directional and efforts to explain to the policemen that there was no such indication proved abortive.

The motorist’s claim was confirmed by Punch correspondent who visited the area and spoke to residents.

Oyinlola, who is the Executive Director of the Advocacy for Societal Rights Advancement and Development Initiative, alleged that his vehicle was impounded after he refused to part with the money demanded by the officers.

Emem was later charged before a mobile court on one count bordering on driving against traffic before Magistrate L.K.J. Layeni.

Layeni, while delivering judgment on November 25, discharged and acquitted Emem of the charge of driving against traffic and ordered the release of the vehicle.

The car owner, in a letter by his lawyer and addressed to the state governor and the attorney-general, noted that he suffered extreme hardship during the period his vehicle was impounded by the task force officials.

Oyinlola, who demanded the sum of N10m compensation within 30 days of the receipt of the letter, threatened to file a suit in court.

The letter read in part, “In his judgment on page 9, His Honour, L.K.J. Layeni berated the task force members for setting traps for motorists at the subject scene, instead of refusing them to ply further the route in the absence of appropriate signage. The judgment of His Honour clearly vindicates our clients’ position, which was all along communicated clearly to the arresting officer and the lead prosecutor, prior to commencement of proceedings.

“Our clients have been unjustly oppressed by the instrumentality and powers of the state and have suffered debilitating psychological trauma in view of the penalty attached to the offense. They, therefore, seek damages for their unlawful arrest and prosecution in the circumstances in the sum of N10m, one of the bases being the amount of money they expended on defending themselves to establish their innocence.

“Our clients also suffered colossal inconvenience and extreme hardship, denial of access to their vehicle as a means of transportation for nearly four months, which necessitated their daily commute for both business and personal trips through car hire services. Our clients’ businesses also suffered attention and income losses on account of the distraction they faced, owing to their unlawful arrest and prosecution by agents of the Lagos State Government.”