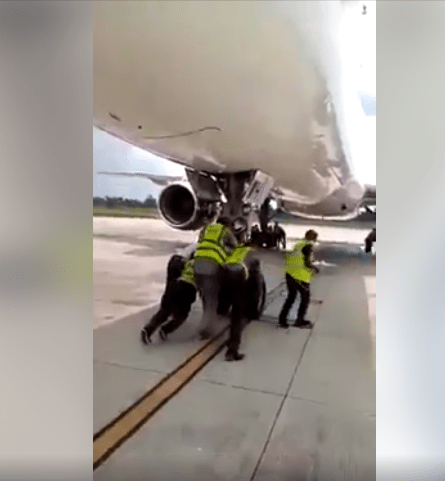 Last week, a video of a group of men pushing an aircraft in an airport in Nigeria went viral.

The scene in the video led to the derision and mockery of the Nigerian aviation sector.

The general impression was that the aircraft was faulty and not airworthy. The aeroplane was described in our local parlance as a “push-and-start”.

However, what most commenters did not understand was that the process of pushing an aircraft – especially from a hangar – is a normal process in prepping an aircraft for flight.

In aviation, that process is called a “Push back”.

Watch below the viral video of an aircraft being pushed back together with another push-back scenario.

In aviation, pushback is an airport procedure. It is done to move an aircraft backwards. That is, using an external force to push it away from an airport gate or a hangar.

Note, aircraft are capable of moving themselves backwards – or doing a reverse movement (using reverse thrust). However, this is often not recommended.

If there are structures around, the resulting jet blast might cause damage to the terminal building, airport equipment or even personnel.

Pilots cannot see what is behind the aircraft as aircraft do not have rear-view mirrors. That is another reason why they would need to be pushed back.

Another reason for pushback is that aircraft with low-mounted engines may also blow sand and debris forward and then suck them into the engine, causing damage to the engine. A pushback is, therefore, the preferred method to move the aircraft away from the gate.

However, there are situations where the push-back vehicle may not be available. Or when there are faulty. In such cases, airport personnel are often assembled to push the aircraft to a safe position for flight.

The Danger of Manual Push-back

There is a potentially serious hazard when airport or airline personnel manually push an aircraft.

There have been reported accidents worldwide where personnel were run over by the aeroplane wheels during the pushback process.

If not fatal, the injuries incurred are always serious, sometimes requiring leg amputation. Carelessness and inattention have contributed to most of the accidents.

So, during a manual pushback, personnel must be aware of the possibility of being run over by the nose wheel and of the continually changing positions of the aeroplane and tug.

Godwin Obaseki: Checkout The Amazing Reception He Gets From A Crowd As He Alights From An Aircraft (VIDEO)