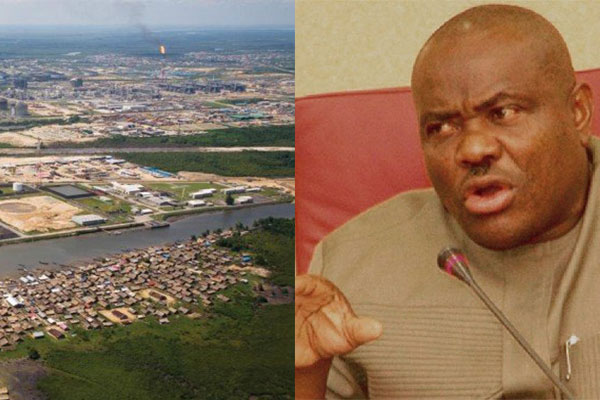 Nyesom Wike, the governor of Rivers State, has alleged Federal Government is unwilling to buy into his idea of constructing the Bonny Deep Sea Port of his dreams.

He noted that the federal government is never willing to executive the Port it conceived for Rivers state. He suggested that they are only deceiving the people from the outset.

The Jigawa state governor also bashed the All Progressives Congress, APC, as ruling without vision and feeling for the people.

Wike declared, “Let them (FG) tell us what they had done for Rivers state. I hear they want to flag off railways narrow gauge from here (Rivers) to Maiduguri. Is that what we need?

“They want to do Bonny Deep Sea Port, for how many years now? Before the drawings will come out, has the government not gone? In their hearts, they know they’ll not do it. They only have this year, next year is a political year.

“We cannot be deceived any longer. PDP is a party that Nigerians and Rivers people have seen that have the zeal, and commitment to save Nigerians.”

On the newly commissioned project, he told benefiting communities, “Those from Isiopko, Obele, Ibaa, and Rumuji, will look back and reflect on how this road was. Do not forget it easily.

“There is no way the government can share money with everybody. But it has a duty to make the environment conducive for you to work and find food to eat.”

Lamido, shortly before inaugurating the project, said, “When APC came on board, they had no programme, no plan.

The only thing they had was to flush out PDP from the government because we were performing, we were organised, because we were committed, compassionate, and very humane”.

He explained that remodelling of the nation’s airports, rehabilitation of railway, and reform in the power sector are all PDP initiatives and not that of the APC.

“They (APC) can’t think. They have no vision, they have no feeling, no compassion. They are there for the power and the power is there tormenting them because the power was abused”, he stated.