The Rapid Response Squad (RSS) has released the Lagos State Traffic Law for driving against traffic. This is coming a while after their tweet on how court ordered ‘one-way’ traffic offenders to forfeit their vehicles. You can read the detailed post on “Court Orders ‘One-Way’ Traffic Offenders Caught In Lagos To Forfeit Their Vehicles”.

RSS shared on Twitter a relevant section of the Lagos State Traffic Law that captured driving against traffic. The request for the traffic law came from their followers after the court verdict that ‘one-way’ traffic offenders should forfeit their car. 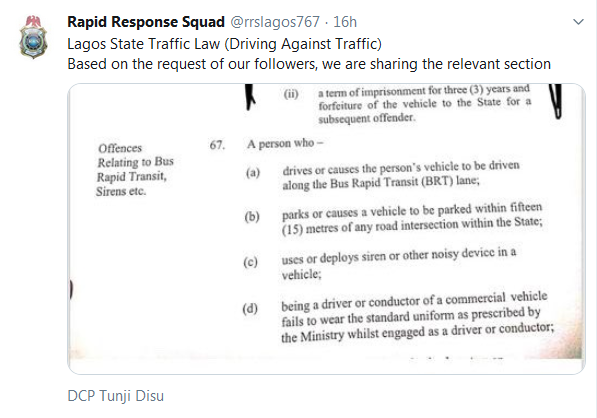 Penalties For Neglect of Traffic Directions.

Where an officer of the Authority is for the time being engaged in the regulation of traffic on a highway, or where any traffic sign being a sign for regulating the movement of traffic or indicating the route to be followed by vehicle has been lawfully placed on or near a highway in accordance with the provisions of this Law, any person driving or propelling any vehicle, who-

(a) Neglects or refuses to stop the vehicle or to make it proceed or to keep to a particular lane or direction of traffic when directed to do so by the officer in the execution of his duty; or

(c) All offenders shall have their data and biometrics captured.

Cities With The Biggest Traffic Jams According To Statista