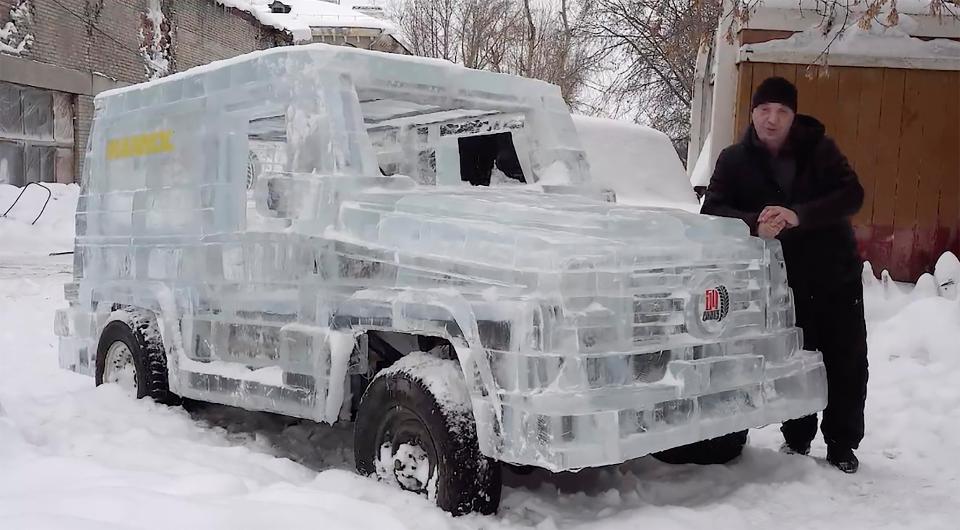 A Russian man in Siberia named Vladislac Barashenko decided to build himself a running, driving copy of a Mercedes-Benz G-Wagen out of the most plentiful resource around him,the Ice

With an average high of just−25 °C (−13 °F) in January, there’s plenty of ice to go around,and he decided to take advantage of that and create his own unique version of Daimler’s iconic off-roader.

The internal combustion engine demands something a little more melt-proof than ice, which is also famously lousy for things like tires and suspension systems.So he stripped down an old UAZ 469—a Soviet Jeep Wrangler to the chassis and running gear to create a blank canvas.

With the help of a steel frame to help hold everything together, he and his team attached six tons of carefully-sculpted ice blocks made from “pure frozen Siberian water,”

Despite weighing as much as an elephant, the icy G-Wagen (Gelïcedewagen?) actually runs and drives, as seen in this YouTube video. The whole thing is in Russian, but you can skip ahead to 6 minutes in to see the ice truck drive through the snow.

It was made over two weeks as a stunt by the tuning team, and with its neon lights,its a big hit with locals in the city park.