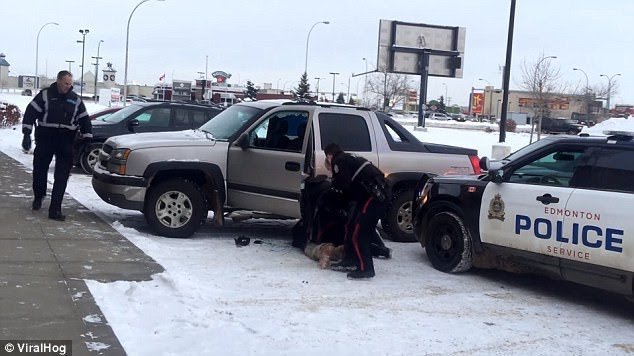 A dramatic arrest took place in Canada in early February when a young man was tasered after getting caught trying to steal a truck.

The potential truck thief was in the midst of trying to hotwire the truck when the vigilantes surrounded him.

The action kicks off with several men surrounding a parked  Chevrolet Avalanche, with one man saying that the truck belongs to him. Together, the men managed to keep the suspect inside the vehicle until the police shows up.

It took a while before the officers were able to take the suspect into custody, as he refused to exit the vehicle as instructed. He was arrested only after the officers broke the driver’s side window and tasered him.

After being treated for non-life-threatening injuries, the suspect was later released into police custody.

The 19-year old now faces multiple  criminal charges, including possession of a weapon dangerous to the public, possession of break and entry tools, possession of a controlled substance and obstructing an officer, to go with the attempted theft charge.

The case is an example of when Police brutality is not only welcomed but encouraged.

But do you think our men in black can be as smart as the Canadian police without taking the boy’s or innocent passersby’s life?

22,000 Toyota And Lexus Cars Recalled Due To Fire Risk