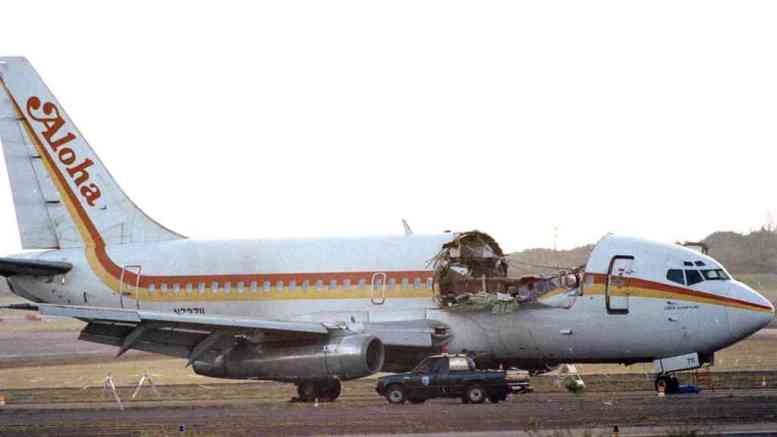 On April 28, 1988, an Aloha Airline’s Boeing 737-297 flying between Hilo  and Honolulu in Hawaii suffered an extensive damage with one-third of its roof blown off due to metal fatigue and corrosion.

As the Aloha Airline’s Flight 243 suddenly lost altitude, passengers began singing hymns and bracing for a crash. Thirteen minutes after the explosion, the pilot landed the 19 year old aging aircraft safely at Kahului Airport on Maui. 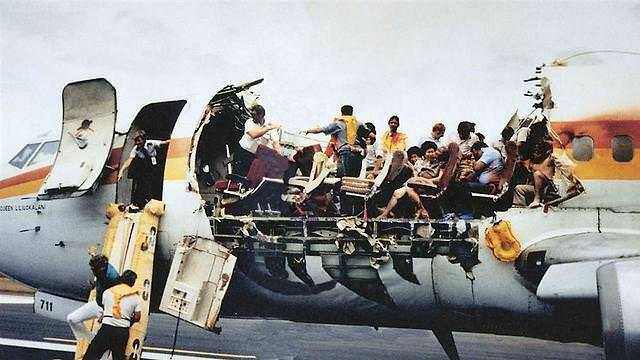 The passengers onboard were quickly evacuated from the aircraft through the emergency evacuation slides.

See the illustration and the actual aircraft (@1.57 mins) moments after landing

During the explosion, 58 year-old flight attendant Clarabelle Lansing was ejected from the airplane and was never found . About 65 passengers out of 89 and crew were injured.

An aerospace engineer who was aboard the plane with his wife said
“The stewardess had just said, ‘Would you like one more drink? She was handing my wife a glass when suddenly she disappeared”

Most of the survivors congratulated the Pilot Robert Schornstheimer for his seemingly miraculous landing.
One of them said :
“I give credit to the pilot,”
“He brought that plane down so smoothly. It was just like riding in a Cadillac.”

It was a miraculous fit to land the aging aircraft with passengers exposed to open sky and high winds at an altitude of over 24,000 feet over the Pacific because, in theory , a Boeing 737 with nearly one-third of its roof blown off should not be able to fly.

A Day To The Arrival Of President Emmanuel Macron Of France, Nigeria Began Constructing The Road Leading To Fela Shrine (Video)