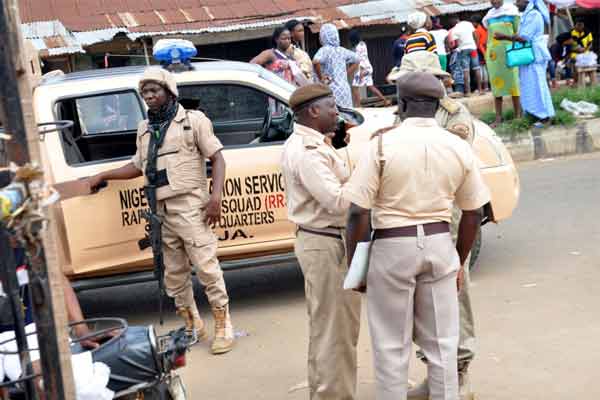 Like a sepulcher, it looked nice on the outside. At the gate, they seemed alert and professional. The entrance was imposing.

The dusty car park is a long walk to the offices. Those who created that car park knew the institution would be inefficient. They made room for a crowd. The car park was full.

There were many good-looking buildings. Then I reminded myself I was not in a police station in Bariga. It was the headquarters of the Nigerian Immigration Service. It should look decent. The environment was clean. But there were people everywhere. A white canopy housed what seemed like a church. Chief Aregbesola, the Minister of Internal Affairs, had vowed to cleanse the place before June. So what was happening?

Someone pointed out the building, which was named after somebody. The man must be one of the heroes of that organization. I passed through a dead metal detector. A security man scowled and asked me where I was headed. I deemed it a joke. We were in the middle of an Ogbete market. Who could seriously be asking anybody where he was headed in that confusion? Being a Lagos man, I ignored him and coded solicitude, and he ignored me.

Another congregation sat like tired passengers in a railway station waiting for a train that was already one day late. It’s wasn’t a beehive. It was a herd of frustrated people. I ran upstairs in search of my agent. Everybody had a man or woman. At Immigration, the staff are agents. In no time, I met the terms, and my documentation was complete. I was asked to wait. I preferred to loiter, to take in the scenes. A potbellied immigration staff had Akara wrapped in a sheet of old newspaper inside his upturned cap. He was playing Solitaire, a card game, on his desktop. The staff beside him was explaining to his client that they were overworked because, “Nigerians are impatient.”

One thing was evident; our Immigration officers were probably never taught how to dress smartly. Trousers hung on waists askew; only a few had trousers that didn’t make them look like the court messengers of the old. The entire institution needs a massive re-alignment. I took a second look at the interior of the building. The contractor did a shoddy job. Perhaps he knew the offices would be occupied by indolence and shiftlessness. The POP ceiling looked like the guesswork of an ambitious apprentice.

Outside and in the sun, I watched citizens languish. I hung around and watched a lady wail. She might have been on the verge of missing out on something critical. Like missing out on an immigration visa appointment that would catapult her into the arms of her foreign-based knight-in-shining armour. I saw a senior immigration officer come to her with an air of philanthropy and beckoned her to follow him. The way the man spoke, it looked like he could turn bitter waters into sweet waters in that institution. The girl hesitated and then followed. I hadn’t imagined, I would be fed with so much drama. 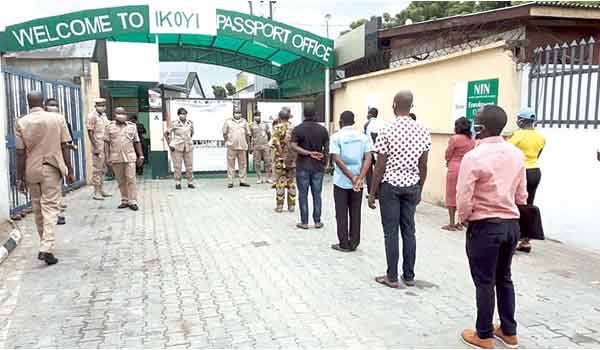 A moment later, I received a call. It was my agent. Perhaps I had paid enough to merit a VIP treatment. I was asked to come upstairs to the VIP section. I got there and met a crowd outside. We hung there, on the corridors. All of us, black and white. Yes, many Asians. They wanted the green booklet too. I stood for two hours. I resisted the urge to scream at the officials and walk away. I resisted the urge to drag in a big man, my ECOMOG. Soon my agent, a young, well-dressed immigration staff, re- appeared. He came with apologies. He located my file. I filed in. The VIP room was an Oshodi bus stop. Immigration staff poured in and poured out. The room reeked with clumsiness.

Thirty minutes later, a clap of thunder and electricity fled. We waited. Somebody turned on the torch on his mobile phone. The door was opened to let in light and air. A man informed a disgusted woman who had wondered why the generator had not come on that there was no serviceable generator. He asked us to pray. After praying for the rain to go away, to somewhere else, I prayed for the electricity company. The rain went away, but electric power didn’t obey. With straight faces, the staff asked us to exercise patience. At 5 pm, I left. Men don’t cry.

The government doesn’t subsidize passports. So why is it difficult to collect money from citizens and issue them travel documents? In the United States, you only need a visit to a post office. And a few weeks later, your passport would come to you. This 2021. The Minister should watch CCTV clips of these passport centers. Immigration offices are saturated with touts in uniforms shuffling around, feasting on their indolence. This is the age of technology. Why can’t we surrender the documentation to one or two banks?

It must be a deliberate policy to make passport booklets scarce and make citizens suffer. Otherwise, it’s inexplicable. Why weren’t there ten processors instead of two at the VIP section? How can booklets wholly paid for by consumers be scarce perennially?

Chief Aregbesola has promised innovations. But he must take his broom to that institution and sweep out a mercenary culture and ‘deadwoodism.’ The rot is deep. Cosmetics won’t do.