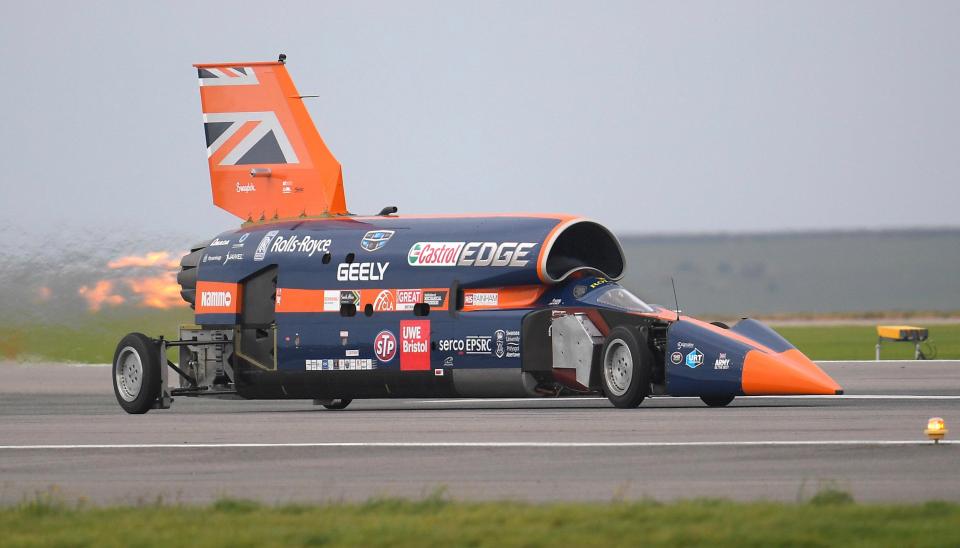 The Bloodhound, which combines technology from motorsport, space travel and a fighter jet and cost £30 million ($40 million) to build, did its “slow speed” trial at Newquay Airport, Cornwall.

It will try to smash the landspeed record of 763mph in 2019 on a specially cleared desert course in South Africa.

The thousands of spectators were treated to the ear-splitting sound of the vehicle, as well as the bright orange flame from the Eurofighter EJ200 jet engine.

“We did two back-to-back 200 mph runs in a five-ton car,” Green said after stepping out of the cockpit.“It felt like about eight seconds, which was what we were expecting.”

Although the test runs only used the vehicle’s jet engine, for the real record attempt it will also have a cluster of three rockets similar to those used by the European Space Agency mounted on the back of the car.

These will accelerate the car from 650mph (1060kph),which will be achieved with the jet engine alone to more than 1,000mph.

This is all knowledge needed to go 800mph in 2019, and then up to 1,000mph in 2020,when the rocket technology becomes available.This is currently being developed by the Norwegian aerospace and defence company Nammo.

12 Bridges Around The World Built To Preserve Nature And Wildlife