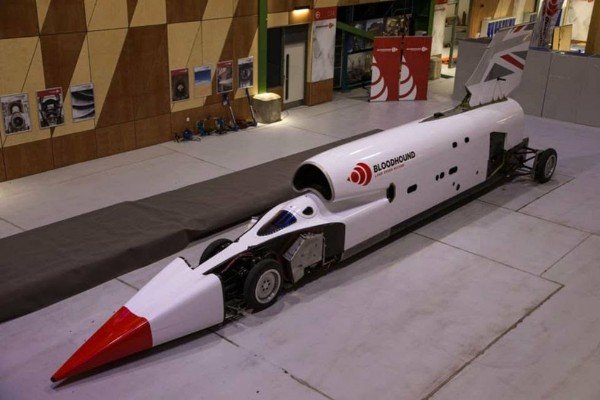 Ex-RAF pilot Andy Green will attempt a 500mph tesrun on a dry lake bed in South Africa’s kalahari desert in October this year, before returning late in 2020 to try to smash his own land speed record of 763.035 mph live on YouTube.

His goal is to hit speeds of over 1,000 miles per hour with the bloodhound supersonic car and set a new all-time land speed record in the process.

Andy, who was also behind the wheel of the record-breaking Thrust SSC back in 1997, said:
“We’ll learn a tremendous amount by going fast on the desert. This is where science meets reality and it all starts to get really exciting.”

The 44ft long Bloodhound supersonic car is powered by a massive Rolls-Royce EJ200 jet engine and three Nammo rockets that gives an equivalent of 54,000-thrust horsepower or an combined output of 360 family cars.

Yorkshire businessman Ian Warhurst, who bought Bloodhound from administrators last December, said:
“I’m thrilled. The 747-8 is booked to fly Bloodhound to South Africa and we’ll have 30 staff out in the desert.

“This is a dress rehearsal for the record-breaking campaign.

“We will make up to ten runs between 300mph and 500mph because that is the point where the car is likely to be most unstable.

“The grip from the wheels will fall off faster than the aerodynamic forces build up.”

The new Bloodhound has been upgraded with parachute braking system and a solid aluminium wheels, more air sensors and a fire detection and suppression system.

The 12-mile Hakskeen Pan track in South Africa was specially designed for this speed run, and October’s test will be the first time the Bloodhound supersonic car runs there.

See The Hundreds Of Brand New Cars, Including Jeep Gladiators And Wranglers, That Were Damaged In Nevada Train Derailment