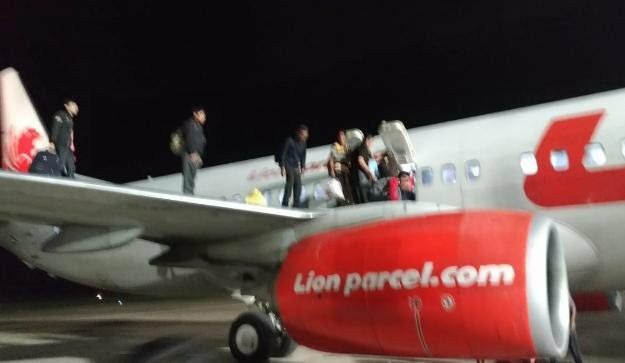 A Lion Air’s Boeing 737 with 189 passengers onboard was preparing to take off to Jakarta on Monday night when passengers overheard a 26-year-old man telling a flight attendant there was a bomb on the flight.

One of the passengers then broke the emergency window exits, allowing  panicked passengers to climb out of the windows onto the plane wing and then to the ground.

About 10 passengers injured with broken bones and head wounds were admitted to hospital for treatment.

No explosives were found when police and security officials at the airport did an inspection of the plane.

Both the passenger who broke the emergency exit windows and the 26 year old who joked about the presence of a bomb on board were arrested .They face up to eight years in prison.

After a three hour delay, the aircraft departed for the one hour flight to Jakarta, the capital of Indonesia.

What a dry and expensive joke .