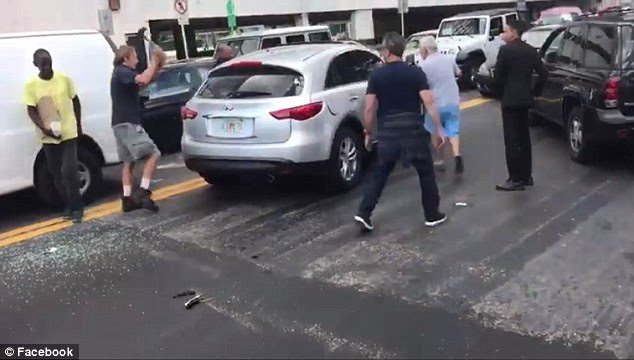 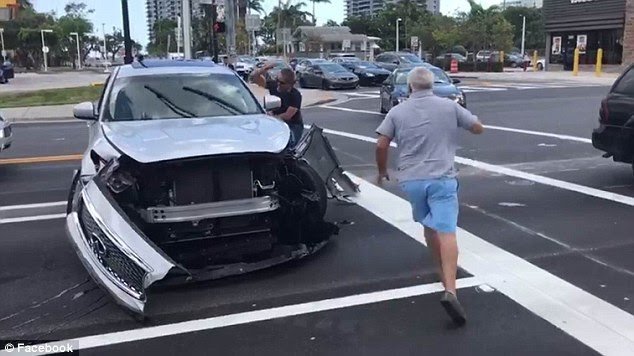 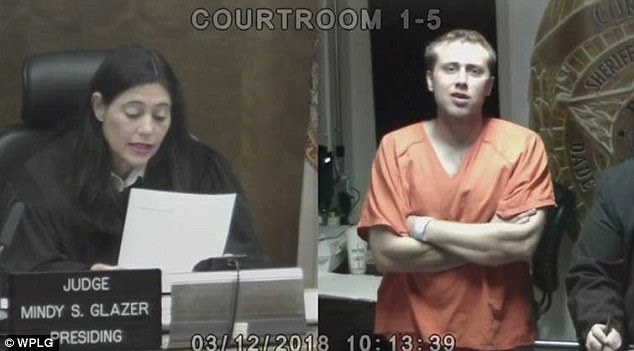 The video starts just after the crash, showing the significant damage to the front grille and side panel of the SUV.

The accident happened when the driver of a Nissan Infiniti crossed into oncoming traffic and crashed into three cars.

Suddenly, the man behind the wheel starts to reverse the car, causing a few people who had gotten out of their cars to crowd around the vehicle to try and stop it from leaving.

The driver weaves around the group and other cars trying to block him in and turns onto the other street.

It’s there that the car comes to a stop again when another SUV blocks the lane.

One man tries to open the passenger-side door of the car, but breaks off the handle.

It’s around this time that a man waiting in a white van at the traffic light gets out of his vehicle carrying a sledge hammer.

He then starts bashing in the windows of the car, starting at the driver’s side and working his way around the entire vehicle.

As glass hits the ground, the driver starts to force his way through the group and between the cars trying to block his way.

The clip ends with the SUV driving off, being pursued by some of the other cars that were at the scene.

Not long after, a police officer tried to pull the car over because the driver was driving recklessly.But the driver would not pull over, so the cop backed off because of the Miami PD’s no-chase policy for non-violent crimes.

The 25-year-old driver was later arrested and it was revealed that he had a long history with law enforcement as he was ticketed 29 times in 10 years.

He was charged with reckless driving, leaving the scene of an accident with property damage and fleeing or eluding police and ,according to his arrest report, he appeared to “be high on narcotics”.

The person who wielded the sledgehammer was not ticketed or arrested for his involvement.

Ambode Is Not Joking at Oworonshoki!

21 Celebrities Who Own Private Jets