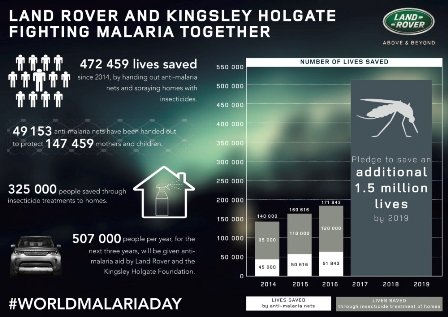 Land Rover and humanitarian adventurer (Kingsley Holgate) has committed to a bold goal in the fight against malaria, one of the biggest killers in Africa. Between 2017 and 2019, the Kingsley Holgate Foundation, in conjunction with Land Rover, will provide effective measures to more than 1.5 million people who need to combat the malaria-carrying Anopheles mosquito.

This includes distribution of anti-malaria nets for mothers and young children, as well as comprehensive Indoor Residual Spraying treatments for houses in malaria-prone regions.

“It’s a tragedy that young children can so easily fall victim to a disease that can be combated with such simple measures,” said Lisa Mallett, Marketing Director of Jaguar Land Rover. “Kingsley and his foundation have an incredible passion for raising awareness about malaria and fighting the disease. We want to go above and beyond in enabling that work, to ensure that even those in the remotest areas can have a higher quality of life.”

Since 2014, the Kingsley Holgate Foundation has provided malaria protection for nearly 500 000 people. Through humanitarian expeditions across Africa, the Foundation has helped spread malaria awareness and continued to save and improve lives in remote areas of the continent. Over the last three years, 49,153 anti-malaria nets have been handed out. These nets are treated with a human-friendly insecticide that lasts up to four years, and provide cover for up to three people. 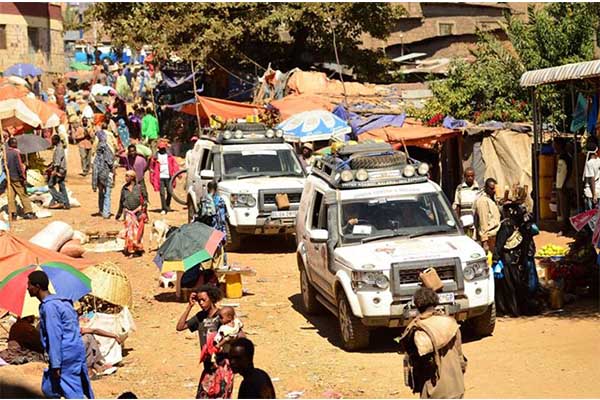 Over the same period Land Rover and the Kingsley Holgate Foundation, through the Goodbye Malaria project, have applied Indoor Residual Spraying to homes, protecting more than 325,000 people from the malaria-carrying Anopheles mosquito.

Over the next three years, the Kingsley Holgate Foundation will triple its efforts to combat this disease that claims more than 400,000 lives each year. For 2017, 2018 and 2019 the Foundation will partner with Land Rover to reach 507,000 people per year – for a total of 1.52 million lives saved by the end of 2019. This will be achieved by handing out up to 19,000 mosquito nets and conducting Indoor Residual Spraying of homes to protect a further 450,000 people, each year.

“The global theme for the 2017 World Malaria Day is ‘End Malaria For Good’, and we believe that our work with Land Rover, over the next three years, will contribute to that,” said Kingsley Holgate. “Malaria is a deadly disease, but it is also easily preventable. We want to bring hope and salvation to the people of sub-Sahara Africa and ensure that millions of young lives are saved.”

Over the past three years Land Rover and the Kingsley Holgate Foundation have distributed anti-malaria nets to 11 countries in Africa, spreading information about malaria prevention practices and recording data in affected areas. Data gathered during the expeditions include community details; GPS coordinates; names of community leaders; the number of nets distributed; details of malaria risk; and locations of the closest clinics or hospitals, to ensure sustainability and assist with follow-ups. 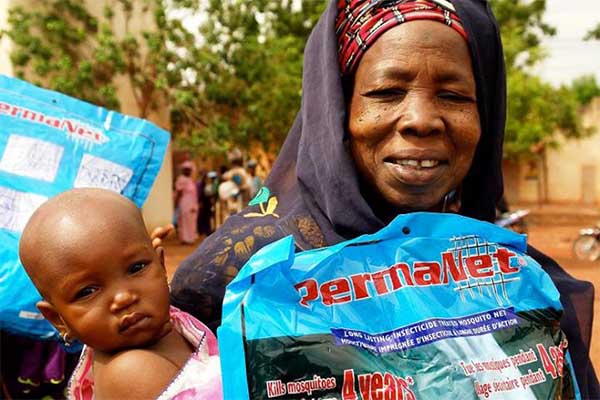 At the start of 2016 nearly half of the world’s population was at risk to malaria, with the population of sub-Sahara Africa most exposed – accounting for 90% of new cases and 92% of deaths. Africans account for nine out of ten malaria deaths, with children under five years being the highest risk.

Since 2000 the incidence of malaria – a treatable and preventable disease – has fallen 37% globally, according to the World Health Organisation*. In Africa alone incidence rates have fallen 42% over the last 15 years, while malaria mortality has plummeted 66% in the region. Simple tools like treated mosquito nets; effective medicines and safe indoor spraying have been effective at saving lives.

See The Number Of Vehicles On Nigerian Roads

Cloth Vs Leather Car Seat: Which Do You Prefer?