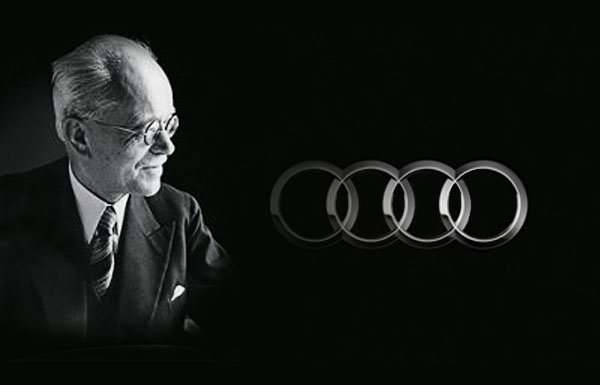 August Horch founded his first car company, A. Horch & Cie. in 1899. But just 10 years later, Horch wasn’t seeing eye-to-eye with his Chief Financial officer and left his own company to start August Horch Automobilwerke GmbH. Unfortunately, Horch soon learned the Horch name belonged to his former company when he was notified of a copyright infringement.

In response, Horch changed the new company’s name to the latin translation of his last name. In German “horch” means “hear,” which in Latin is “audi”.

August Horch, the founder of Audi was a young German engineer who started working as a blacksmith. After receiving his degree in engineering, he worked in shipbuilding before working under Karl Benz, founder of Mercedes-Benz car manufacturing company. Horch worked under Benz for 3 years before starting his own venture.

Four car companies make up the Audi Company and the four-ring logo represents each one of the companies. DKW, Horsch and Wanderer are the three other companies of the “quattro”. This was also known as the Auto Union.

In September 1921, Audi released the Audi Type K, which was the first production left-hand drive car made by a German manufacturer. Consequently, left-hand drive increased in popularity, becoming the standard in the 1920’s.

5. First to carry out crash tests

Audi was the first company to carry out crash tests. In 1938, Audi performed some crash tests in order to figure out how the car would react in case of an accident. Inadvertently, they had set a precedent that still exists to this day.

6. Olympics sued Audi because of the rings

Mercedes and Audi have always entangled in rivalry on and off the track. Back in 1938, just before WW II, the Auto Union took the help of Ferdinand Porsche to design the fastest track car. The alliance came up with a 560 horsepower producing V16 beast called the Auto Union Type C. Thanks to the rear mounted engine and enhanced handling, Type C managed to clock 430 kmph on the Autobahn. In your face Bugatti!

4 Airplane Facts That Can Cure Any Fear Of Flying

5 Reasons Why Carsharing Makes You Proud