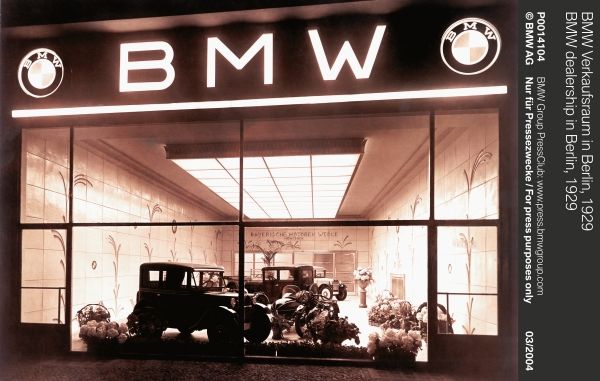 Courage, independence, competing with the best while forging new pathways – these have been the characteristics of the BMW Group since 7 March 1916. Today, BMW Group Classic is looking back on a series of events, record achievements and innovations, from the altitude world record in 1919, through the debut of the MINI 60 years ago, to the invention of the modern SUV with the X5 in 1999 – many others will follow in the course of 2019.

On 7 March 2019, the anniversary of the company’s establishment was celebrated for the 103rd time. During this period, a small aero-engine factory transformed itself into the world’s leading premium manufacturer of automobiles and motorcycles. This development reflects the character of the company and the key people who shaped its success. The company ethos is based on the courage to innovate, the readiness to go the extra mile, the drive to compete with the best and the ability to overcome special challenges. In 2019, BMW Group Classic looks back on numerous events, outstanding achievements and innovations that are based on precisely these principles.

Below are their achievements down the years

1. A high-altitude flight as the first record for BMW (100 years ago):

On 17 June 1919, the experienced test pilot Franz Zeno Diemer set out to help the fledgling company BMW achieve a first world record. He took off from Munich’s Oberwiesenfeld airfield piloting his aeroplane manufactured by Deutsche Flugzeugwerke and powered by the BMW IV aero-engine on the route to a sensational record attempt. The 230 hp engine was designed on the basis of a principle conceived especially for flying at great altitudes. Diemer took around one and a half hours to fly his machine up to an altitude of 9,760 metres. In the open cockpit, he had to contend with temperatures down to minus 50 degrees and breathe in air with gradually diminishing oxygen levels. Never before had an aircraft flown so high. 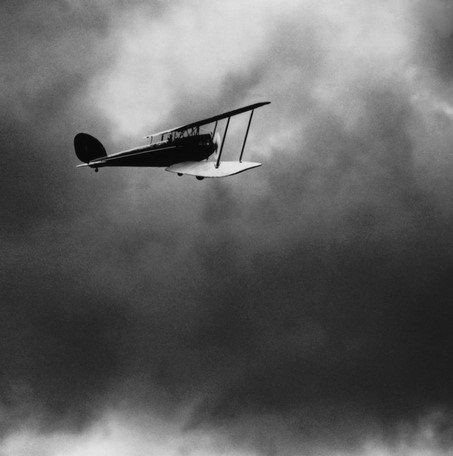 Ten years later, BMW had already expanded its product portfolio with motorcycles – then came the next step. The Board of Management decided to get involved in the automobile business. The Chairman was Franz-Josef Popp, who had held a management position with the company in the early stages of aero-engine production. “Our experience in the area of motorcycle construction encouraged us to embark on the production of small cars, for which there appears to be a promising domestic market. With this end in mind, we purchased automaker Fahrzeugfabrik Eisenach,” announced Popp in the company’s Annual Report. On 22 March 1929, the first BMW 3/15 PS left the assembly halls in Berlin-Johannisthal. Almost 16,000 units of the new small car followed in the years up to 1932.

You may also like: Rolls Royce CEO Admits RR Brand Would Have Been Dead If Not For BMW

He sketched out the first design drafts on a napkin. The designer Alec Issigonis created a revolutionary small car on the basis of the resulting plans. On 4 April 1959, the first classic MINI rolled off the assembly line at the Austin Longbridge plant in Birmingham. In spite of an external length of 3.05 metres, the little car provided sufficient space for four occupants and their luggage. Issigonis applied a completely new design at the time, with front-wheel drive, a four-cylinder transverse engine mounted at the front of the car, and the gearbox configured beneath. This design layout was soon adopted by virtually all manufacturers in modified form. It offered the best prerequisites for the principle of creative use of space and for excitingly agile driving performance – attributes which characterise the models of the British premium brand to this day. 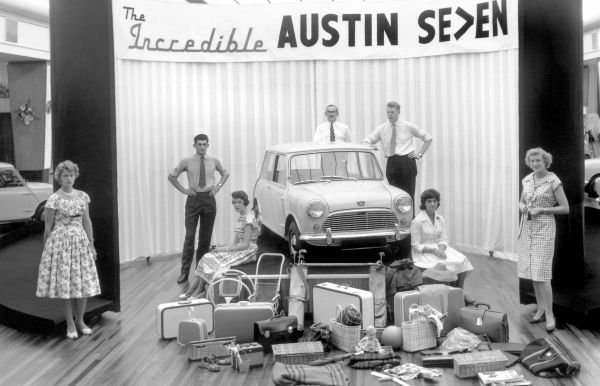 During the 1950s, the company made significant contributions to getting people in the young Federal Republic of Germany on the road with the BMW Isetta and the BMW 600 that was derived from it. However, the aspirations of the customers continued to rise and it was necessary to create a new small car with a conventional design in order to compensate for falling sales. The Viennese BMW importer, automobile designer and former racing driver Wolfgang Denzel provided the key impetus. He presented the BMW Board of Management with the design for a two-door notchback car that had been designed by the Italian designer Giovanni Michelotti. The prototype formed the platform for the BMW 700, which was presented for the first time on 9 June 1959. By 1965, more than 190 000 units had been sold and BMW succeeded in ascending out of the economic trough. 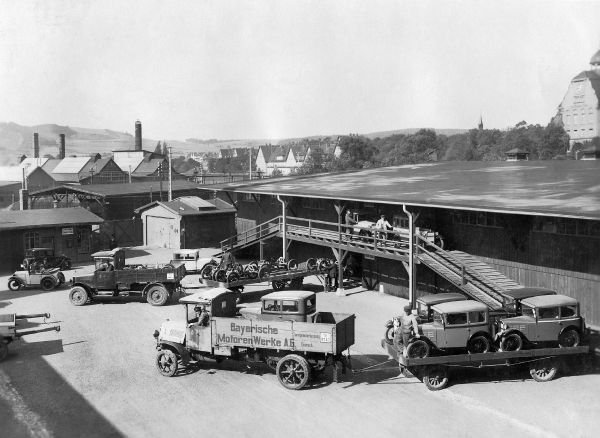 5. Small shareholders defend the independence of BMW (60 years ago):

Sales problems in the automobile and motorcycle business had caused BMW serious financial difficulties during the 1950s. At the Annual General Meeting held on 9 December 1959, the takeover of the company by Daimler-Benz AG was therefore an item on the agenda. However, the restructuring plan associated with the takeover was opposed by many of the small shareholders. During the course of a turbulent discussion, the lawyer Friedrich Mathern managed to depict inconsistences about the official figures. He objected that all the development costs for the BMW 700 had unjustifiably been included in the balance sheet for 1958. He also criticised the fact that the value of the BMW brand and its employees had been valued much too low. The meeting was then adjourned – with the result that the time-limited offer from Stuttgart expired. BMW remained independent but the financial crisis had not been resolved. The increased commitment of major shareholder Herbert Quandt ultimately provided the assurance needed to move forward. In the following year, he submitted a new restructuring plan which also took account of the interests expressed by the small shareholders.

6. A new era of motorcycle production begins (60 years ago):

Aero-engines had already been manufactured in Berlin-Spandau under the direction of BMW since the 1930s and after World War II motorcycle and car compnents as well. In 1969, the entire production of motorcycles was relocated from Munich to Berlin. The start of production for the BMW /5 Series went hand in hand with the move. The technical director at the time, Helmut Werner Bönsch, presented it with self-assured words: “There is no doubt that BMW has been building the best and most advanced motorcycle in the world for many years. Our ambition is to maintain this reputation into the future.” This was indeed the case. The BMW 50/5, BMW R 60/5 and BMW R 75/5 models had been developed as sporty touring motorcycles in a modern design, and they had a completely new chassis with telescopic fork for the front wheel and variable rear-wheel suspension. And for the first time, customers were able to choose between versions with different colours.

The BMW M1 mid-engined sports car was already irresistible when it was standing still. But it developed its true fascination on the racing track. This emerged above all in the Procar Series initiated by the Managing Director of BMW Motorsport GmbH at the time, Jochen Neerpasch. The races were staged in 1979 and 1980 as part of the warm-up for the Formula 1 World Championship races in Europe and they developed into a runaway success with the public. The protagonists themselves were also captivated by Neerpasch’s idea of staging races between Formula 1 drivers and touring car drivers piloting vehicles with identical engineering and generating 470 hp. On 12 May 1979, the first race in the Procar Series started in Zolder, Belgium, and 16 more races were to follow. 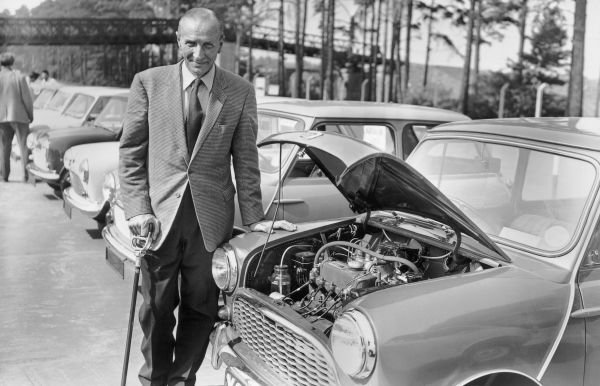 An all-rounder with all-wheel drive which was not only capable of impressive driving on off-road terrain but also demonstrated excellent performance on the road – this was how the BMW X5 was presented in autumn of 1999, as the world’s first Sports Activity Vehicle. A few months later, the BMW X5 Le Mans demonstrated its huge potential for dynamic driving. This was an experimental vehicle with a V12 engine generating more than 700 hp. Racing driver Hans-Joachim Stuck achieved a top speed of 309 km/h in this car on the Nürburgring. 20 years after the debut of the first SAV, the family of BMW X models has grown to seven model series. In 2018, 37.3 percent of the brand’s total sales were generated by BMW X models.

In 1999, BMW also presented a milestone in its roadster history, which was certainly not lacking in highlights. The BMW Z8 styled by Danish designer Henrik Fisker created a sensation at its world premiere on the occasion of the International Frankfurt Motor Show (IAA). The elegant lines recalled the legendary BMW 507 and the luxurious cockpit make it an eye-catcher to this day. The classic forms clothed innovative engineering: a self-supporting aluminium frame with the external skin bolted on, powered by a 400 hp V8 engine. A total of 5,703 units of the BMW Z8 were manufactured between 2000 and 2003 at a dedicated production facility established especially for this vehicle at the BMW plant in Munich.

BMW Group Classic will be saluting these anniversaries in a variety of events and publications during the course of 2019. In the meantime, the Press Department of BMW Group Classic is providing more detailed information on the topics outlined above.

With its four brands BMW, MINI, Rolls-Royce and BMW Motorrad, the BMW Group is the world’s leading premium manufacturer of automobiles and motorcycles and also provides premium financial and mobility services. The BMW Group production network comprises 30 production and assembly facilities in 14 countries; the company has a global sales network in more than 140 countries.

The success of the BMW Group has always been based on long-term thinking and responsible action. The company has therefore established ecological and social sustainability throughout the value chain, comprehensive product responsibility and a clear commitment to conserving resources as an integral part of its strategy.

Related Topics:103 yearsanniversarybmw
Up Next

20 Things To Know About The Asaba Airport