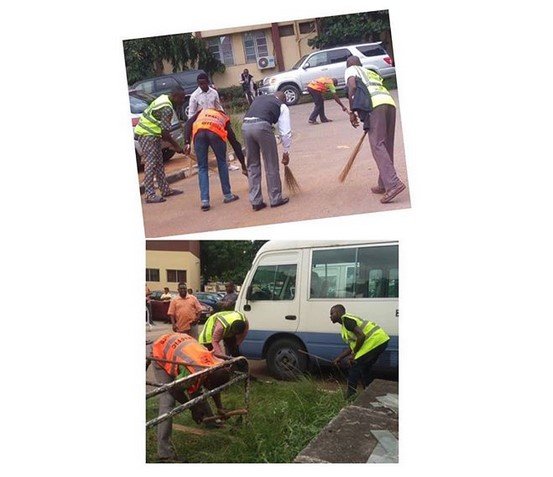 The 17 traffic offenders that comprised of 15 men and 2 ladies.

Yesterday, they were brought to the Lagos State Secretariat, Alausa, Ikeja for community service.

The 17 of them were convicted by the Special Offenses Court, sitting at Oshodi.

The were all engaged in clearing of bushes and wastes at the secretariat. That was among their punishment.

Mr. Mahmud Hassan who is the Lagos State Transport Management Authority (LASTMA) spokesperson, said offenses ranged from non-use of seat belts to dropping of passengers at unauthorized places, and driving on the BRT corridors, among others.

He added that the convicts would be sent to the streets to serve their sentence at the “discretion of the officer that is in charge of that department.”

He also promised potential traffic offenders that they too would face similar action when caught.

“They have been taken to other places before coming here and I think after here, you would see them on the road also performing community service,” he said.

Do you think this is a good development ?

Related Topics:alausaBRTlagoslasthmanigeriaoshoditreaffic offenders
Up Next

Tanker Kills 4 In A Bar In River State