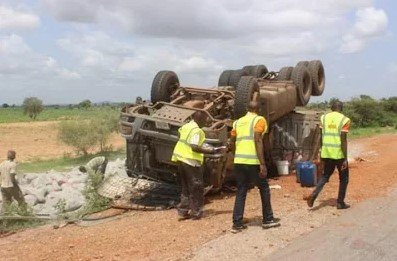 A fatal road crash took place off a military checkpoint in Ngelzarma town in Fune Local Government Are, Yobe state. The accident claimed the lives of three persons and left four others severely injured.

The crash involved a Volkswagen Golf Wagon and a trailer. Three occupants in the golf which includes the driver lost their lives while one was severely wounded. The crash happened around 3pm on Tuesday.

You may also like: Killers Of Uber Driver Arrested; Car Recovered

The two vehicles had a head-on collision with some eyewitness blaming the golf car driver of approaching the trailer head-on and crushed it, leading to the death of the three passengers with four other sustaining injuries.

The injured passengers were evacuated and taken to the general hospital Damagun including a woman and her baby whose husband is among the dead.

The trailer and the golf car were travelling on different directions. While one was from Kano, the other was going to Maiduguri, Borno state.