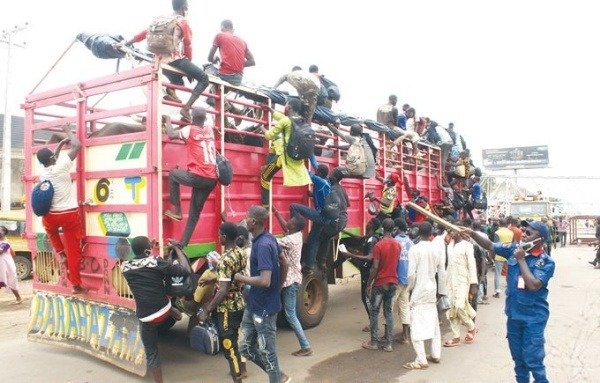 Some of them fled on sighting the security personnel at the boundary between both states.

The truck, along with 42 that could not escape, were sent back by the security agents.

Security agents on Monday intercepted a truck and 42 Lagos-bound men from Zamfara state at Berger.

A trailer loaded with cow and about 60 people coming from Zamfara State was intercepted by the security agents at the Berger end of Lagos-Ibadan expressway on Monday.

It was gathered that the travellers, who reportedly came from Zamfara and neighbouring states, were heading for the Agege area of Lagos.

According to reports, some of the men jumped down from the truck and fled on sighting the security personnel at the boundary between both states.

42 of them, who could not escape, as well as give convincing reason for coming into Lagos, were sent back.

The motor boy from Zamfara State expressed surprise that the security agents is sending the truck back.

He said the cows were meant to be delivered to an abattoir in Agege.

“We left Zamfara around 6pm on Sunday, but not all of us here are from Zamfara State. Some are from Sokoto, Kano and Kebbi states. I am the motor boy for the truck and I followed it from Zamfara down to where we are currently.

“We want to deliver the cows to an abattoir in Agege. I can’t really say the exact time we were stopped, because I did not take note of the time. I don’t know why we were stopped.”

Confirming the incident to reporters, the state Police Public Relations Officer, Bala Elkana, said the men could not be allowed into the state.

“Forty-two men from Zamfara State hid in a truck and were intercepted at the Berger end of the expressway. The law is very clear. If you’re escorting a vehicle conveying food items, you must not be more than seven, but these people violated the law and they were turned back.”

“We have been searching all vehicles and all food items thoroughly to be sure that nobody is being smuggled into the state and this has helped us. We have sent the truck back; it cannot come into the state.”

Yemi Osinbajo: The Masked-Up VP In His Mercedes-Benz S-Class (PHOTOS)