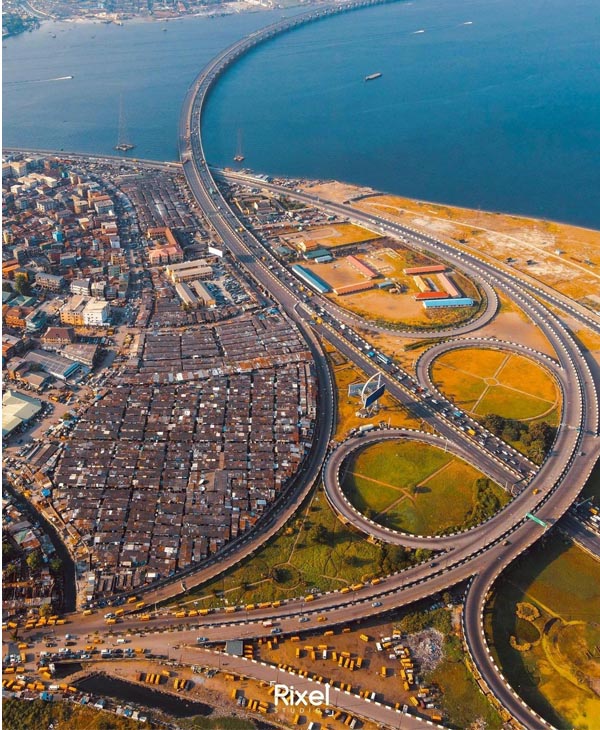 Third Mainland Bridge is the longest of three bridges connecting Lagos Island to the mainland, the other are the Eko and Carter bridges. It was the longest bridge in Africa until 1996 when the 6th October Bridge located in Cairo was completed. Aerial Photo

Below is a beautiful aerial view of the bridge as captured by Rixel  Studio.

Technical Features of the Third-Mainland Bridge

At 11.8km long, the Third Mainland Bridge is the longest of the three road bridges crossing Lagos Lagoon. It was also the longest bridge in Africa when it opened.

The Third-Mainland Bridge starts from Oworonshoki and ends at the Adeniji Adele Interchange on Lagos Island. aerial photo

The bridge features an interchange between Lagos Island and the road interchange at Ebute Metta – a neighbourhood of mainland Lagos.

The Third Mainland Bridge carries eight lanes of traffic – four in each direction. There is a median separator – a structure to mark the division between the two sets of lanes – running down the centre.

Engineers used two slender concrete shafts – or pillars – for each of the bridge’s piers. A pier is an upright support for a structure such as a bridge or arch.

The project team constructed most of the bridge’s spans at 45m, though some were up to 60m. A span is a distance between two of a bridge’s piers.

The overall width of the structure is 33.1m, including 3.5m for the median separator.

Engineers constructed an artificial island in Lagos Lagoon at the point the bridge met the road interchange at Ebute Metta.

In 2006 and 2013, parts of the bridge were closed for repairs. This was amid reports that the structure was vibrating as traffic passed over it. Some observers put the blame for the vibrations on the gridlocks that frequently built upon the bridge. This, they claimed, but the structure under increased strain.

According to a traffic report on Third Mainland Bridge in 2002, the number of vehicles in both directions recorded in 12 hours was 180,902 vehicles, which may have doubled or tripled after 16 years.

The Lagos State government are now planning a 38km-long fourth bridge to relieve congestion on the existing bridges in the state.


Related Topics:aerial-photothird mainland Bridge
Up Next

10 Things To Know About Boarding The Lagos-Ibadan Train