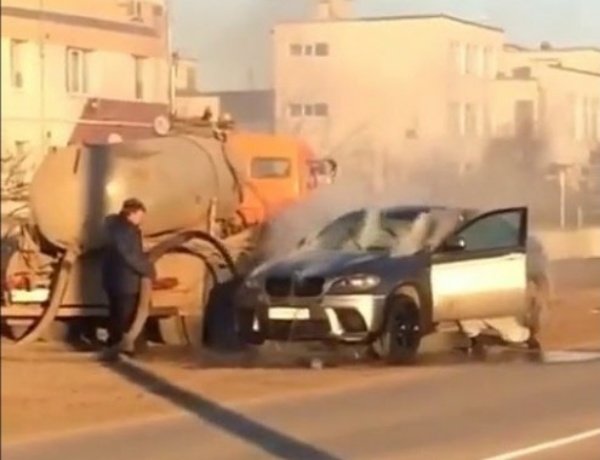 The engine of a BMW X6 SUV that caught fire was extinguished with the stinky contents of a septic truck. The incident happened on a Russian highway.

God forbid… What would you do to save your car if the engine goes on fire? You will likely put out the fire with fire extinguisher/s or wait for a fire truck to arrive. The latter option may likely see the car being consumed by the fire.

For a BMW X6 SUV owner, he literally begged the driver of a septic truck to help use its stinky contents to extinguish the burning engine. And it worked…

As seen in the short clip, the hose from the septic truck was used to spray the stinky fire extinguisher on the burning engine.

The initial cause of the fire has not been determined. But it may likely be an electrical or mechanical problems. These are some of the reasons why fire extinguisher is mandatory for all vehicles.

A similar incident happened a year ago in South Africa. A flame, which was mostly confined underneath a Mercedes, ended up consuming the whole car.

The reason why the car was completely engulfed by the flames was the owners attempt to quench the fire with water instead of a fire extinguisher.

Back To The BMW owner. Would You Have Done The Same If You Were In His Shoes ?