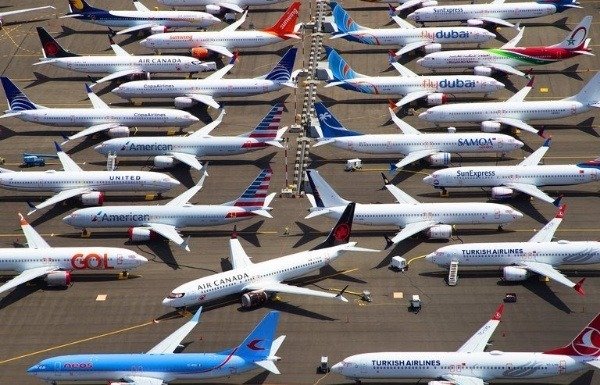 Before the two crashes that took the lives of all passengers and crew members in 2018 and 2019; the 737 MAX was the fastest-selling airplane in Boeing history — accumulating more than 4,700 orders from 102 customers worldwide.

But today, over 500 Boeing 737 Max planes have been grounded around the world following two deadly crashes.

The US Congress and the Federal Aviation Administration are currently investigating how these accidents occurred.

The Washington Post and The New York Times were able to access over 100 pages of email and chat transcripts that were handed over to Congress as part of its investigation.

The documents showed an employee — who had major concerns over the safety of the planes – more than a year before the first air crash — saying :

“This airplane is designed by clowns, who in turn are supervised by monkeys,”

Even before the first crash, one employee asked his colleague …“Would you put your family on a Max simulator trained aircraft?” The colleague replied “No,”

“I still haven’t been forgiven by God for the covering up I did last year;” one of the employees said in messages from 2018, in reference to interactions with the Federal Aviation Administration.

The transcripts also revealed that Boeing was trying to save a large amount of money for the airlines that bought the 737 Max by convincing the FAA that simulator training for the new jets was unnecessary.

Reacting to the revelations, Boeing said in a statement that :

“These communications do not reflect the company we are and need to be, and they are completely unacceptable,”

“We regret the content of these communications, and apologize to the FAA, Congress, our airline customers and to the flying public for them. We have made significant changes as a company to enhance our safety processes, organizations, and culture.

“The language used in these communications, and some of the sentiments they express, are inconsistent with Boeing values, and the company is taking appropriate action in response.”

So far, the investigations shows that the Jet’s Maneuvering Characteristics Augmentation System is the main culprit in the crashes.

On Tuesday, Boeing said it found manufacturing debris contaminating the fuel tanks of some 737 Max jets.