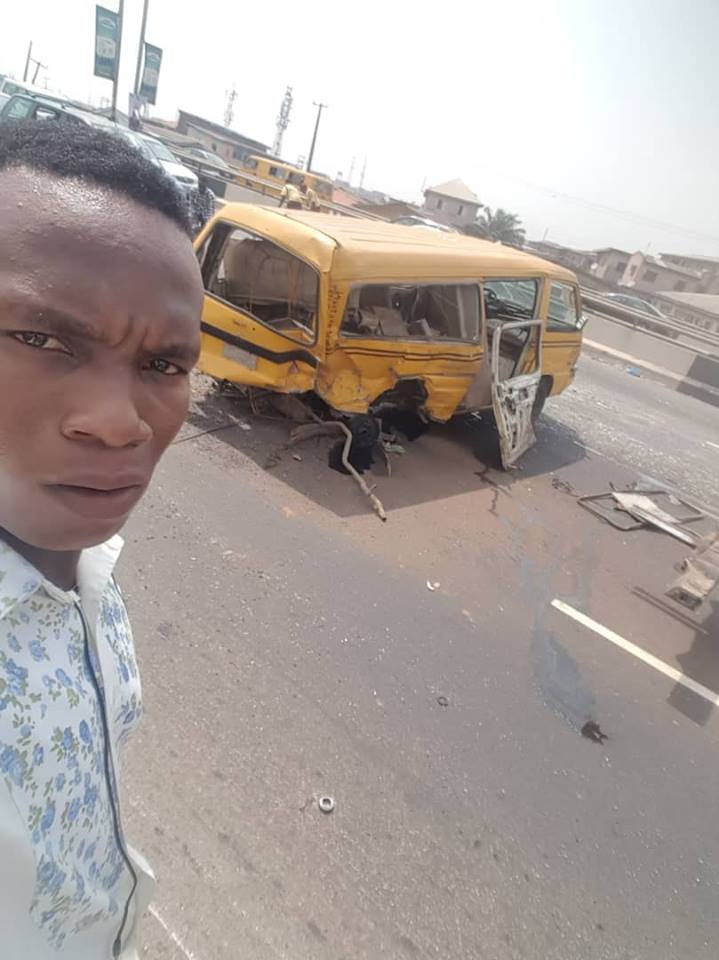 On the 5th of December 2018, we made a post regarding former Governor of Ekiti state, Fayose Ayodele, involved in an accident on third mainland bridge. We even went further to show what the accident scene looked like; you can read about it here.

The owner of the bus in the accident scene whose name is Taiye Adams together with the Lagos State Traffic Management Authority have accused a former governor of Ekiti State, Ayodele Fayose, of refusing to repair the bus and a motorcycle he allegedly crushed with his white Mercedes Gwagon in an accident on the Third Mainland Bridge in Lagos.

You may also like: Accident Scene Of Ex Governor Fayose’s Accident On Third Mainland Bridge (Photos)

The said all their efforts to reach the ex governor or his aides all proved abortive since the occurence of the accident.

On the said day, the former governor was reportedly speeding on the Third Mainland Bridge when he rammed into Adam’s bus and the motorcycle, which belongs to LASTMA.

The ex-governor, who sustained minor injuries as a result of the crash, was taken to a hospital for treatment after which he was discharged.

The bus driver said that the ex governor promised to repair his mangled vehicle, but had refused to honour his word up till this day.

He said, “My vehicle had broken down on the Third Mainland Bridge that day when a LASTMA official rode his motorcycle to the spot. He called a towing truck from their office at Iyana Oworo. I put a C-Caution sign on the road to warn other motorists.

“While we awaited the arrival of the towing truck, the LASTMA official was also diverting traffic from my bus.

“Fayose, who was alone in his car, was driving on top speed when he rammed into my bus. He also crushed the LASTMA motorcycle. A lot of people came to his rescue and the vehicles were taken to the LASTMA office at Iyana Oworo.”

The 42-year-old Offa, Kwara State indigene said when he approached the traffic agency a few days after the accident, he was assured that Fayose would compensate him.

Mr Adams added,“I told him that the bus had been damaged beyond repairs. Mr Bakare asked me the value of the vehicle and I told him it was N1.7m. He said Fayose would pay the money.

“When I did not get any feedback, I went back on December 23, 2018. The LASTMA officer said Fayose was not responding. I asked him if the ex-governor did not admit to his fault or he was not just ready to replace my bus. Mr Bakare said he did not respond. When I consulted with my union leaders at the motor park, I was advised to get a lawyer to engage with Fayose.”

Punch.ng correspondent learnt that the case had been referred to the Femi Falana Chambers.

The spokesperson for LASTMA, Mr Mahmud Hassan, said aides of the former governor had taken Fayose’s vehicle from the yard.He noted that Fayose and his aides did not honour their promise to compensate the driver, adding that the agency’s damaged motorcycle was also left unattended to by the ex-governor.

Hassan stated, “Our motorbike was also badly damaged. The bus, the motorbike and Fayose’s vehicle were all moved from the road to our yard. His aides came to our yard to remove his vehicle and they promised to get back to us. But we have yet to hear from Fayose or his aides.

“Because of his status, we believe that something will be done. But as we speak, even our damaged motorbike is there just like that.”

To Report Or To Make A Complaint Against A LASTMA Official, Call These Phone Numbers