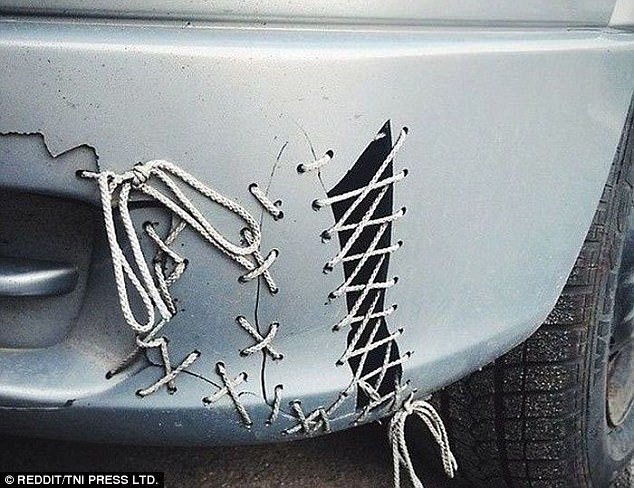 There’s nothing more frustrating than denting your much cherished car and having to fork out hundreds of pounds for an overpriced repair at your local garage.

But some car owners decided to take matters into their own hands by attempting to tackle the problem themselves with some very questionable DIY jobs.

The funny pictures were shared by car owners on Reddit and I know you might have seen a car with a worse DIY repairs on Nigeria roads.

Inspired by a corset, this vehicle owner decided to give his broken car a stylish touch with some rope and a bit of creative flair

In an attempt to stop her broken door from swinging open mid-journey, this owner used a simple padlock to keep things under control

Perhaps to prove his driving skills weren’t as bad as they appeared, a man used some spray paint to explain how he smashed his car up

As this car owner proves, a simple fork and elastic band can be all you need to fix a broken door handle

Some of the car repairs are priceless, including this attempt at holding together a broken door with a makeshift plaster

Despite their attempts to repair this car, it looked like it belongs on the scrap heap

Some of the DIY car repairs were absolutely baffling and involved complex uses of rope, often making matters worse

Rather than send his car to the scrap heap, this driver used a huge plank of wood to make ammends

A man who covered a dent with a leaf

Spot The Differences – Then And Now Photo Of Lagos